In his second season in charge of the Dublin Senior Hurling panel, manager Mattie Kenny has decided the team needs a new leader on the field. And yesterday he named Danny Sutcliffe to succeed Chris Crummey as the team captain for the coming season. That season kick off this Sunday. The Dubs head for Nowlan Park to face Kilkenny in the opening round of this year National League.

Crummey, who was installed as captain back in 2018 by then manager Pat Gilroy. The Lucan Defender was a towering presence and an amazing motivator on and off the pitch. So much so that he was kept on in the role when Kenny took over for the 2019 season.

Danny Sutcliffe was a 2013 All Star winning forward. And he has established himself as one of Dublin’s most exciting and prolific player in recent years. A member of the 2013 Leinster Senior Hurling Championship winning side, he also won a provincial medal at U21 level.

In 2016 the Judes man opted out of Ger Cunningham’s inter county set up and didn’t returned until coaxed by Pat Gilroy in late 2017. During his sabbatical, Danny moved to the US where he continued his hurling, with cameos for New York in the 2017 Connacht Championship.

Some Selection Headaches for Kenny

This Sunday is expected to be Sutcliffe’s first official outing as the county captain. But the panel may be somewhat different to what Dublin fans may be expecting. Mattie Kenny is faced with the dilemma of having 14 players involved in Fitzgibbon cup action this week.

And what we already know is Liam Rushe, Fintan McGibb, Shane Barrett and David Treacy are all ruled out due to injury. Donal Burke and Jake Malone have picked up knocks and are unlikely to play any part.

The jury is also out on veteran Conal Keaney as he has yet to rejoin the panel following Ballyboden St Enda’s All Ireland Semi Final appearance. 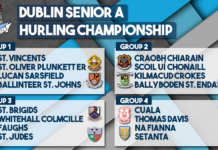