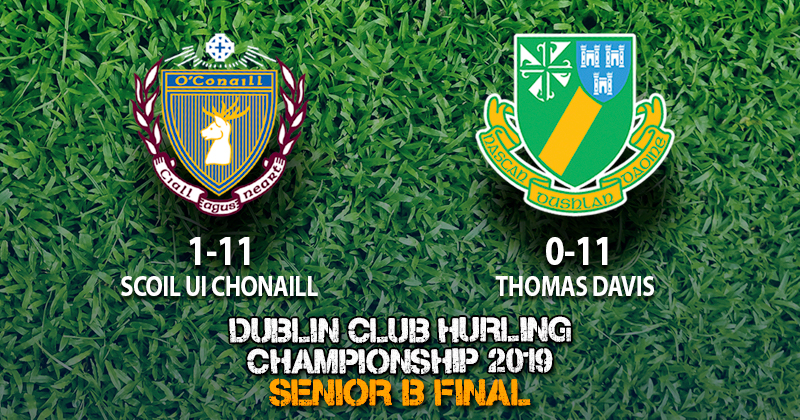 Scoil Uí Chonaill came from four points in arrears to finish victorious in this evening’s Dublin Senior B Hurling final. A dogged second half display saw them come back from trailing to Thomas Davis at half time by 0-08 to 0-04

Both sides are promoted to next year’s Senior A Hurling competition. But today belonged to Scoil.

Midfielder Eoin McKay got the only goal of the game in the 11th minute of the second half, when he scrambled the ball over the line from close range following some hard work by team mates Neil O’Flynn and Andy Bunyan

At that point the sides were level, 1-5 to 0-8. Thomas Davis had held the interval advantage. McKay opened Scoil’s second half account with a well struck score from out the field.

Heading toward the final fifteen minutes of the game Thomas Davis restored their lead when Kevin Ward scored from play. But Scoil dead ball man Robert Kennedy had the teams level by the 48th minute before Ward again nosed Davis back in front from a free. But it was the last time Thomas Davis would lead.

Scoil Up Tempo To Finish Strong

Scoil Ui Chonaill shifted gears for the final ten minutes. Kennedy hit two points to go 1-08 to 0-10 clear. Substitute Cathal Hardiman was denied by the quick reflexes of Thomas Davis keeper Seán Blanchfield when he turned and shot for goal from close range.

Two more Kennedy points saw Scoil increase their lead to three with just a minute of normal time remaining. Another Ward free closed the gap but Kennedy’s hit the final score with a free from halfway, injuring his knee in the process.

The first half saw the Thomas Davis half-back line giving their side the edge. Ryan Deegan and David Keogh leading by example, but particularly Keogh.

Keogh had several spells of possession from defence in possession and hit a wonderful point in the 18th minute from inside his own half.

Scoil did have a first half penalty in the ninth minute but Barry Cushen’s effort lost most of its pace when he bounced it off the pitch surface and David Mottram comfortably stopped the danger.