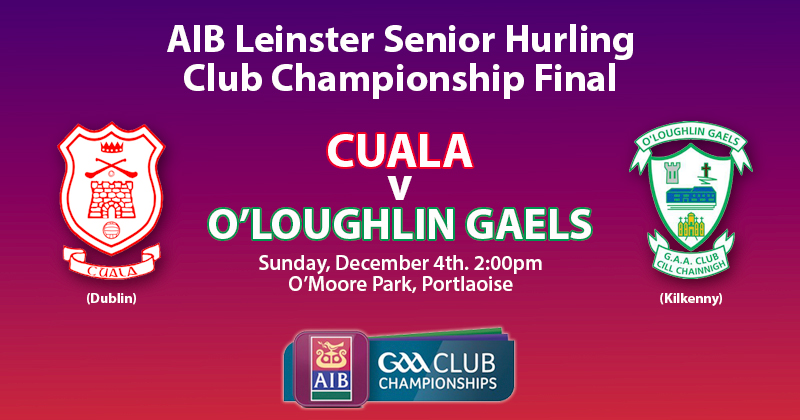 The venue for this year’s Leinster Club Senior Hurling Final was confirmed earlier today and the champions from Dublin and Kilkenny will travel to Portlaoise on December 4th to decide who will represent the province in the All Ireland Hurling Club Championship at the beginning of next year.

After a fantastic county and provincial campaign last year, Cuala sadly fell at the last provincial hurdle, beaten in the Leinster Final by Wexford Champions Oulart-The Ballagh. That defeat however has not stopped the Dalkey outfit, and they started once again in this campaign as they left off.

Back to back county championships, beating Kilmacud Crokes in an immense final, and have quite comfortably overcome Laois Champions Borris-Kilcotton and Carlow Champions St. Mullins to reach the provincial summit once again. They’ll be hoping it’s their time to claim their first ever Leinster Senior Hurling title, and of course brave the elements outside the province come next February.

On the last two occasions O’Loughlin Gaels won county honours, in 2003 and 2010, they successfully went on to claim the Leinster Championship both times, so their record speaks for itself.

Having beaten old rivals and fifteen time county champions Ballyhale Shamrocks in this year’s county decider, they set their sights once again on the short provincial run, facing reigning Wexford and Leinster Champions Oulart-The Ballagh in this years Semi Final. And climbing the next stretch of that mountain, the Kilkenny men went to the lions den of Innovate Wexford Park, and with an inspired performance, dethroned the Leinster Champions to set up the tie with Cuala in two weeks time.

The scene is now set to decide the last of the provincial champions in this season’s AIB Senior Hurling Championship. Can Cuala make more history for their club? Will O’Loughlin Gaels make it another county and provincial success?

We don’t have long to wait to find out who #TheToughest in Leinster will be.