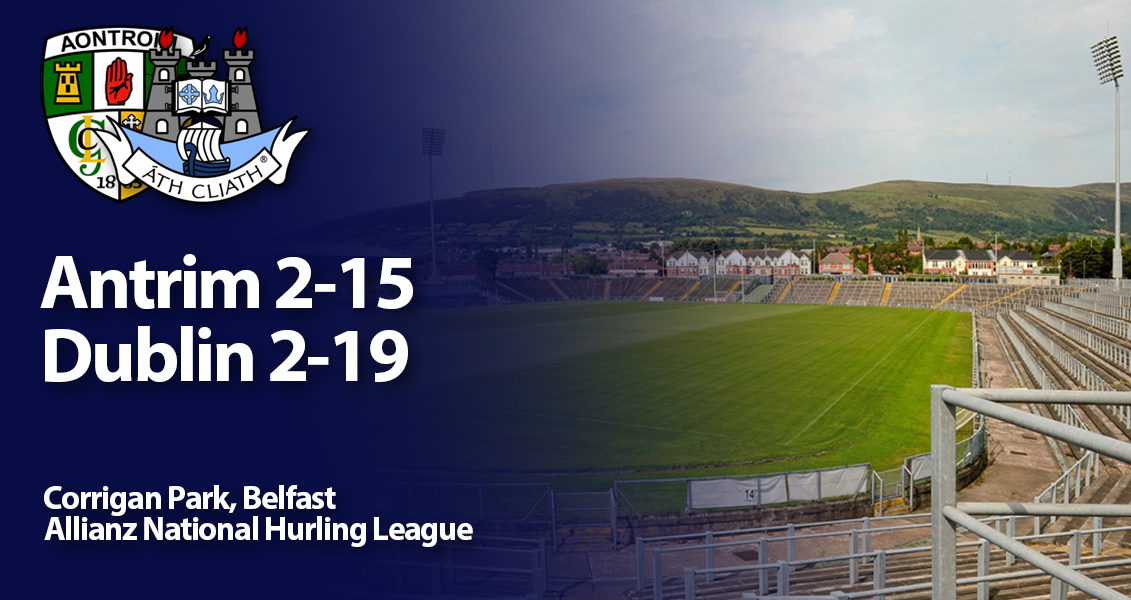 Questions were asked and Dublin answered them all this afternoon in Corrigan Park this afternoon. A dogged second half performance saw them pick up their first hurling league win and their fourth win over Antrim in 9 months. It took a goal from Paul Crummey to finally push Dublin away from a very intense Antrim side. And that was minutes after Neil McManus had netted for the home side.

Dublin were lucky to go into the dressing rooms level at half time after Antrim really brought the game to them in the opening half. And to take the points will be no sweeter a tribute to manager Mattie Kenny, who sadly lost his mother hours before throw in.

Conor Johnston fired Antrim into an early lead, but it was short lived. With the wind at their backs, Dublin reeled off 0-05 with braces from Fergal Whitely and Donal Burke, with Danny Sutcliffe ading the last. And it looked like Dublin would push on and dominate, but that wasn’t the case.

Conal Cunning and Neil McManus got the home side ticking, and Keelan Molloy reduced the gap to one score. Then Antrim hit the front when Eoghan Campbell sent the perfect ball into McManus, turning James Madden to fire the ball past Alan Nolan and into the goal.

Antrim pushed on with more scores from Cunning and Neil McKenna. Burke lifted Dublin’s fight after Paul Crummey was dragged down to be awarded a penalty. The Na Fianna man converted to leave the sides 1-08 a piece at the break.

Dublin hold off Antrim to drive for home

Antrim got the second half off on the up, but Dublin doubled down, outscoring their opponents by 0-06 to 0-02 in the first 15 minutes. Alan Nolan forced a great save from a Conal Cunning attempt, but couldn’t stop McManus in the 51st converting a penalty, leaving only one score between the sides.

The Dubs responded the better, Eamonn Dillon spinning and sending a ball across the goal mouth to the oncoming Paul Crummey who buried it past Ryan Elliot and into the net.

From there, Dublin’s game management was better, pulling further away from Antrim. McManus continued to convert frees keeping the home side in touch. A few wides from those frees would have made the scoreline different had the Antrim dead ball man converted. And kept the advantage with Dublin as the clock ran out.