The second game yesterday in Naomh Barrog was the Dubs Stars Hurling challenge and it was Kilmacud Crokes Oisín O’Rorke who was one of a number of players who shone for Mattie Kenny’s youthful Dublin side.

Kenny’s winning run continued as Dublin easily accounted for the Dubs Stars as the pick of club talent in the capital struggled to contain the fluid play of Dublin.

This may have been a challenge game but both sides couldn’t be accused of not taking the game seriously as they got stuck in from the off.

The Dubs Stars got the first score of the game in the third minute with a point from Ciaran Dowling. Dublin hit back with the next two points both scored by Oisin O’Rourke, a converted 65’ and a fine effort from open play.

The sides were level in the 8th minute with a point from Niall Ring, but Dublin we’re getting into more possession and a point from Caolan Conway in the 11th minute was followed just sixty seconds later with the games opening goal scored O’Rourke following some good work from Glenn Whelan.

A point from Sean Gray for the Dubs Stars put a goal between the teams but Kenny’s charges took control of the game with points from Davy Keogh, Billy Ryan, Glen Whelan and Oisín O’Rourke.

The sides swapped a pair of points each just before the break, Sean Gray and Fergal Whitely for the Dubs Stars and Oisin O’Rourke and Caolan Conway for Dublin as Kenny’s side took a seven point lead with them into the dressing room with the score 1-09 to 0-05.

The Dublin lead was stretched to eight just after the break with a point from Conor Ryan. Niall Ring responded for the Dubs Stars with a nice point and then the game went into a ten minute scoring lull.

The barren spell was finally broken in the 12th minute by Dublin’s Glen Whelan with a converted free. A minute later Sean Gray converted one for the Dubs Stars it would be their last score for ten minutes as Dublin took control of the game.

Points from Diarmuid O’Flynn (twice), Ronan Hayes, Daire Gray and Davy Keogh put Dublin into a commanding lead. A converted free with seven minutes left in the game from Sean Gray proved to be the last score for the Dubs Stars.

Dublin finished the game on the front foot and Kenny’s side hit the last four points of the game, two from Daire Gray and one each from Lee Gannon and Ronan Hayes to run out deserving 15 point winners. 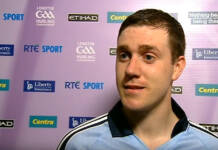 EVERY HURLING PERSON IN THE COUNTRY WOULD LOVE TO SEE CON...