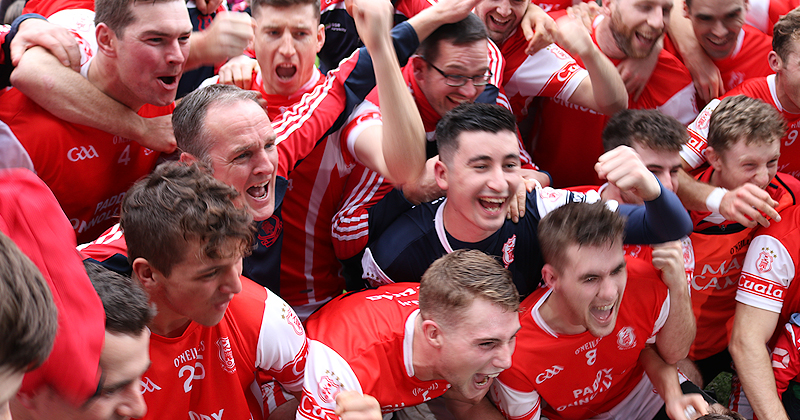 It was never going to be easy for Dublin footballer Con O’Callaghan to match or outdo his Quarter Final performance over Borris-Kilcotton, but this afternoon in Netwatch Cullen Park, the Cuala forward again provided the inspiration his side needed to power through Carlow Champions St. Mullins to set up a final date on December 4th.

It may not have been the best start for the Dublin County Champions, leaking a goal and trailing two scores by the end of the first quarter.

But the conceded goal was probably the injection Cuala’s game needed, and from there showed no signs that Cullen Park was going to continue as an omen after being beaten by Oulart-The Ballagh in last years provincial final in this very ground.

O’Callaghan added 1-03 to his phenomenal 4-03 from their last outing proving the ace in the hole for Cuala boss Mattie Kenny.

With Marty Kavanagh opening the scoring today for the Carlow Champions, it was David Treacy and Con O’Callaghan pointing to seize the upper hand before John Murphy found the net for St. Mullins in the twelfth.

The teams traded scored for the next six minutes before the third of David Treacy’s five frees today finally levelled the playing field, and Cuala quickly added two more from Jake Malone and Mark Schutte.

With St. Mullins taking first blood once again following the break, it was only short lived as O’Callaghan and Treacy again added scores. And in the 39th minute it was the magic of O’Callaghan once more that swung the balance well and truly in Cuala’s favour.

Mark Schutte successfully captured a breaking ball and made a great sideways pass in the direction of O’Callaghan, who allowed the ball to bounce before volleying it perfectly into the St. Mullins net past Kevin Kehoe.

Darragh O’Connell quickly added a score, and Sean Treacy added two to make his tally for the day 0-03.

O’Callaghan, David Treacy, Colm Cronin, substitute Colum Sheanon and Mark Schutte closed the game off with scores. With little reply from their Carlow opponents, the damage was done before St. Mullins day went from bad to worse, losing midfielder Jack Kavanagh to a diced yellow card at the end of the game.

Their opponents in this year’s final will be Kilkenny Champions O’Loughlin Gaels who comfortable beat reigning provincial champs Oulart-The Ballagh on a score of 3-17 to 0-17 at Innovate Wexford Park.