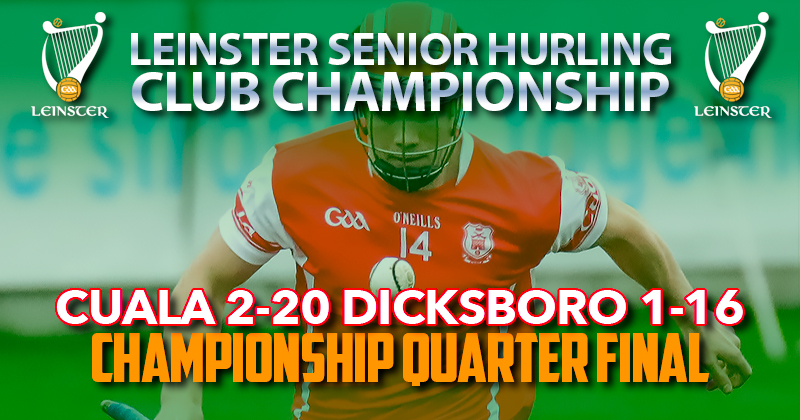 Reigning Dublin, Leinster and All Ireland Champions Cuala took their first towards retaining their Leinster Championship crown with a more than convincing display against Kilkenny Champions Dicksboro this afternoon in Parnell.

Goals either side of half time from Jake Malone and the always impressive Con O’Callaghan saw Mattie Kenny’s outfit comfortably with their Leinster Quarter Final to set up a Semi Final fixture with Wexford Champions St. Martins in two week time.

Not content with his first Senior Football GAA/GPA All Star and of course the Young Player Of The Year, O’Callaghan always looked impressive and dangerous this afternoon, scoring 1-03 of Cuala’s score haul.

David Treacy got the game underway with two perfect free conversions in the opening 3 minutes of play, with O’Callaghan scoring his first of the day before Martin Gaffney got Dicksboro up and running. Nicky Kenny, who was a last minute replacement for Mark Schutte, added a fourth which Shane Stapleton replied to, scoring his of first eight frees this afternoon.

In the 15th, a clever pass from Colum Sheanon found O’Callaghan who put his head down to swerve past 2 Dicksboro defenders to power the ball towards the goal, but the shot was partially blocked only to find Jake Malone in the perfect position to pull on the ball and send it rocketing past Darragh Holohan and into the Dicksboro net.

This put Cuala in the driving seat, but Dicksboro continued to build their game on the second quarter. The teams split 0-12 evenly between them, meaning Cuala finished at the break 0-05 clear on a half time score of 1-10 to 0-08. Cuala’s 6 were scored by Treacy (4f), Colm Cronin and Darragh O’Connell, while Oisin Gough (2), Ollie Walsh, Robbie Murphy, Shane Stapleton (f) and Eoin Gough closed out the half for the Kilkenny Champs.

Murphy opened the second half for Dicksboro to double his day’s tally and closed the gap to 0-04 before another O’Callaghan response. Eoin Gough kept Dicksboro close with another from play before Treacy (2) and Nicky Kenny extended Cuala’s lead to 0-07.

Stapleton added 0-02 from frees within a minute of each other, before Cuala’s boy wonder put an exclamation mark on this afternoon’s game with a goal in the 46th to make it an eight point game. Nicky Kenny, Sean Treacy and Jake Malone were all part of the build up and O’Callaghan just had to slot the ball home for the finish.

Dicksboro substitute Stephen Farrell did give his team a lifeline in the 57th with a consolatory goal but the deficit was already in place and Cuala had continued to tag on scores following O’Callaghan’s green flag. Niall Carty, who had replaced Nicky Kenny in the 51st was good for 2 scores, and O’Callaghan, Cronin and Treacy all shared the remaining white flags to get Cuala convincingly over the line with the final score Cuala 2-20 Dicksboro 1-16.