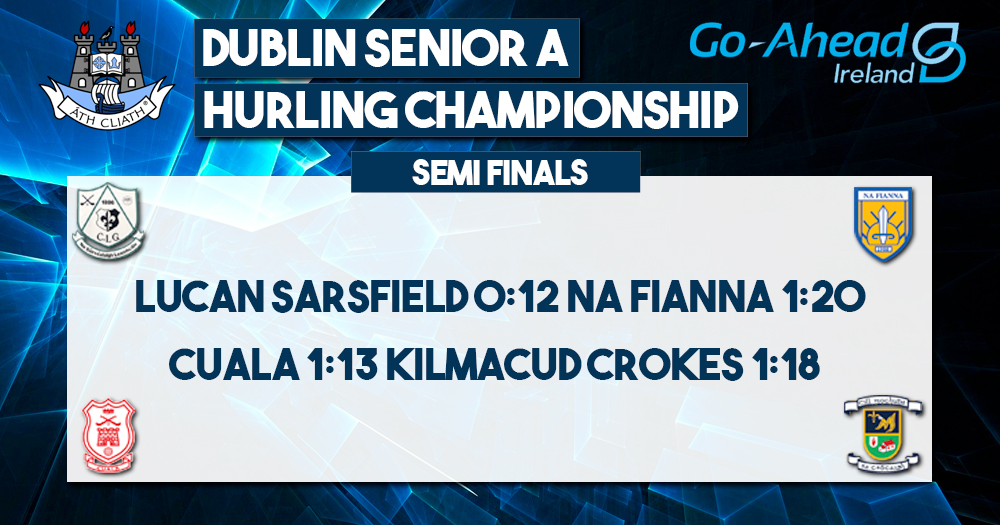 The stage has been set after the weekend’s Dublin Senior A Hurling Championship Semi Finals. And as the dust settles we can look ahead to crowning new Senior Hurling Champions. The 2021 decider will see Na Fianna and Kilmacud Crokes duel for the biggest prize in the county. Reigning Champions Cuala failed in their attempt to win a third consecutive title. And Lucan’s valiant effort of a title crown fell short. Two teams remain standing.

It will be a first ever Dublin Senior A Final appearance for Na Fianna in a couple of week’s time. The Mobhi Road men secured a comfortable semi final victory over a battling Lucan Sarsfield at Parnell Park.

Na Fianna took control early and led from the front. Six score without reply in the first quarter saw the northside outfit take control of the tie early. Man Of the Match Paul O’Dea struck twice to give his side a 0-09 to 0-04 lead at the first half water break.

Lucan remained in touch thanks in part to their free taker Ciaran Dowling. But just before the break, Lucan were struck a devastating as Colin Currie hit the net giving Na Fianna the only goal of the game and putting them 0-09 ahead. And it was a half time lead they never looked like losing.

“Sean & Colin combine- and Na Fianna get the goal!”@ccurrie7 hits the net for @ClgNaFianna!

The momentum continued into the second half with score from Donal Burke, Sean Currie, Micheál Murphy and Colin Currie seeing Na Fianna finish on a comfortable 1-20 to 1-12 winning scoreline. Burke finished out the game with a tally of 0-09 overall.

The dream of three in a row for reigning champions Cuala ended on Sunday as rivals Kilmacud Crokes turned the screw and sent the champions out of the competition.

Crokes were the better value for money in the early stages, with scores from Caolan Conway, Fergal Whitely and a brace from Dara Purcell putting them 0-04 to 0-01 up in the opening five minutes. And they moved further ahead shortly afterwards. Ronan Hayes slammed home a penalty in the 10th minute, after a foul on Alex Considine.

📺 Watch the game live on @SportTG4pic.twitter.com/6wuGeyFyYQ

The half time gap was reduced to 0-03 as Cuala ramped up the pressure. Three scores from Con O’Callaghan and three dead ball conversions from David Treacy saw the reigning champions close in at the break. And Treacy’s free taking kept that scoreboard ticking. But an elusive goal never materialised until the last puck of the game. Sean Moran’s fre crept over the line but it wasn’t enough. Crokes finished with a 0-05 lead on 1-18 to 1-13, sending the Stillorgan side into the decider against Na Fianna.

So it’s Na Fianna and Kilmacud Crokes doing battle for the county silverware this year. New Champions will be crowned and we’ll bring you the fixture details once confirmed.

ANOTHER HUGELY SUCCESSFUL WE ARE DUBLIN GAA AWARDS NIGHT