At the end of Anthony Cunningham’s tenure, Donoghue’s job was to bring success back to the Tribal County. And he did it in spades.

But with any managerial departure comes speculation. And among the names being bandied about this week was of course current Dublin hurling boss Mattie Kenny.

The Galway native brought Cuala two consecutive All Ireland Club Championships. And following the departure of Pat Gilroy after only one year, Mattie Kenny was finally installed as the county whip.

In his first year Kenny has pulled all the strings together. He’s made the Dublin Senior Hurling panel a force to be reckoned with in the future.

Kenny has given Dublin fans some memorable games to savour this year, culminating in an historic 3-19 to 0-24 victory over Galway in the final round of this year’s Leinster title. Sadly with results not going their way they didn’t reach the provincial final. And with Laois pipping them to the post in the All Ireland it ended their season too soon.

Mattie had been linked with the vacant Galway manager’s job in recent days. But when contacted by the Independent the Galway man confirmed his commitment to the three year term given to him by the Dublin County Board.

Jeffrey Lynskey, who won three minor All-Irelands with Galway in the last four years, has also been heavily linked to the job. And after Kenny has pinned his flag to the post here in Dublin, it may very make Lynskey the front runner to take over.

Paul Flynn: GPA misunderstood by a lot of people 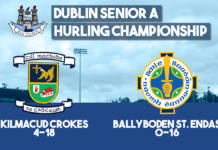 Chiarains and Vincents reach the Senior A Hurling Last Four

What Lies Ahead For Mattie Kenny’s Dublin Senior Hurlers

David Treacy – Take Every Game As It Comes