Dublin champions Ballyboden St Enda’s and Coolderry face off against each other this afternoon. And following the first round of provincial games this is sure to be a tight affair. Coolderry picked up a valuable win over Mount Leinster Rangers in their quarter-final, whilst Ballyboden needed extra-time to see off an excellent performance from Westmeath champions Clonkill.

Boden got the better of Westmeath champs in a refixed game played on an emotional night in Parnell Park. The Dublin side struggled to find their feet in the opening half, but settled in as the game went on. Paul Ryan slotting over a few nice frees and Conal Keaney getting the South Dublin side over the line after extra-time, 2-25 to 2-19.

Today’s game should serve up a close encounter at least. Coolderry have grown as a team ever since their victory over Kilcormac-Killoughey in the Offaly County Final, and gave an outstanding performance in the second-half against Mount Leinster Rangers.They will be hoping to find that same performance when they take on Ballyboden.

Ballyboden will hope that they can play the same game they played when they defeated Kilmacud Crokes in the Dublin County Final Replay. If they can find that same form again, they will be hard to stop in Parnell Park this afternoon. And they showed real spirit in the Leinster Quarter Final. 0-15 for Paul Ryan on the night was what ultimately swung the game in favour of the Dublin Champions. Second Half substitute Paul Doherty lended a hand with 1-02 in extra time to set up today’s provincial semi finals.

We’ll be live from throw in at Parnell Park, with score by score updates on www.twitter.com/wearedub. And you can find all the post match reports and analysis from the game right here and on www.facebook.com/wearedub. 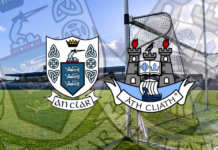 MATTIE KENNY WANTS HURLING FANS FROM AROUND THE COUNTY TO RALLY...