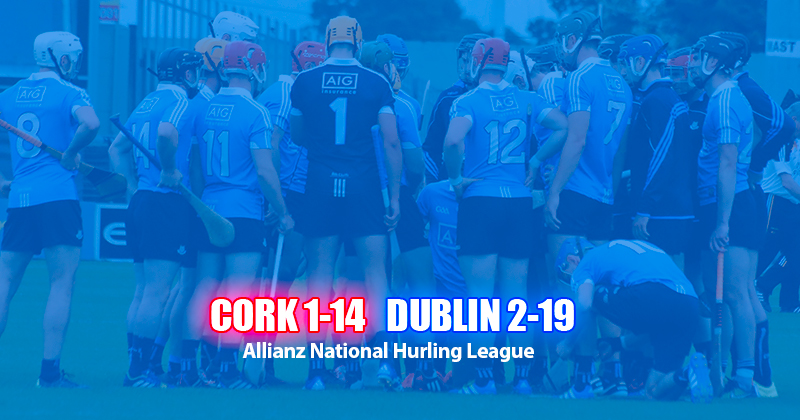 What better tonic for Ger Cunningham and the Dublin Senior Hurling panel after the heavy defeat last weekend? An emphatic victory on the road against Cork tonight in Pair Ui Rinn.

Goals in either half from Ryan O’Dwyer and Eoghan Conroy, plus some outstanding free taking from Donal Burke saw the boys in blue dominate the majority of the game in a complete contrast from last weekend’s events.

Cork had the better fortune in the opening exchanges and were leading by 0-04 to 0-01 by the thirteenth minute. But a Caolan Conway point and a goal helped along by Ryan O’Dwyer saw Dublin take the lead and never relinquish it.

From there, Dublin continued to drive forward, hitting seven scores without reply. Chris Crummey, Fountain Mac Gib, Donal Burke (4) and Rian McBride all doing the damage. Cork managed to pull the deficit back to three scores, with points from Patrick Horgan and a well worked goal and 2 points from Shane Kingston doing damage. But Eoghan Conroy and Rian McBride kept tapping away to keep 0-04 between them at the break on a score of 1-11 to 1-07.

Donal Burke had the opportunity to widen the gap during the half with a penalty opportunity but Cork’s keeper Anthony Nash again proved why he’s one of the best in the country.

With the game still well within Cork’s reach, the second half was expected to be hotly contested and it by no means disappointed. Mark Coleman opened proceedings with the first score, bringing the gap back to 0-03. Donal Burke and Patrick Horgan’s scores cancelled each other out. But When Burke sent a low ball into the path of Eoghan Conroy he was quick to turn and draw blood and sent the ball past Nash into the Cork net.

Despite Luke Meade, Conor Lehane and Patrick Horgan continuing to press, Liam Rushe, Eoghan O’Donnell and Niall McMorrow were cleaning house at the back and not giving away an inch. Even losing Chris Crummey to a second yellow card didn’t dampen the visitors spirits.

Points from Donal Burke (3), Ryan O’Dwyer, Chris Bennett, Eamon Dillon, and Cian O’Sullivan’s additional time score was enough pressure to take the game completely away from Cork with eight points between them. A week makes a huge difference in the League and Ger Cunningham will be leaving his Native Cork tonight feeling better versed to plan for Dublin’s next fixture.