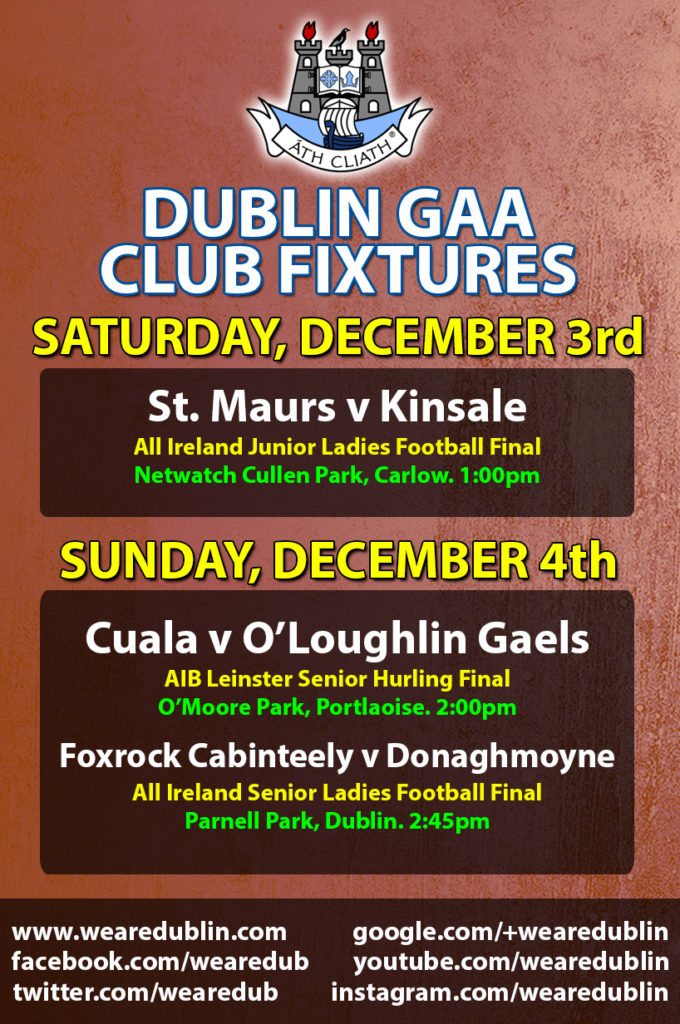 This weekend will see three of Dublin’s best club teams compete in both Provincial and National Championship finals over Saturday and Sunday.

St. Maurs will kick off the action on Saturday afternoon as they face Kinsale of Cork in this year’s All Ireland Junior Ladies Football Championship Final. The Dublin and Leinster Champions had a tough task and went through two games and extra time to get past Latton of Monaghan in their All Ireland Semi Final, but come through it they did. The action gets underway in Netwatch Cullen Park, Carlow at 1:00pm.

Sunday is another massive day for Club action. Dublin Senior Hurling Champions Cuala will attempt once again to win the AIB Leinster Senior Hurling Championship meeting the challenge of Kilkenny’s O’Loughlin Gaels in O’Moore Park, Portlaoise. Beaten in last year’s final by Oulart-The Ballagh, Cuala will be looking to put that memory behind them and lift the silverware. Throw in is 2:00pm in Portlaoise.

Finally, Dublin and Leinster Senior Ladies Football Champions Foxrock Cabinteely will line out in Parnell Park for this year’s All Ireland Senior Championship Final and face reigning champions Donaghmoyne of Monaghan, who knocked Foxrock out of this competition last year. Fox Cab have been unstoppable this year and are primed and ready for this game. Will a Dublin venue be the swing in this year’s All Ireland Final. Throw in is 2:45pm