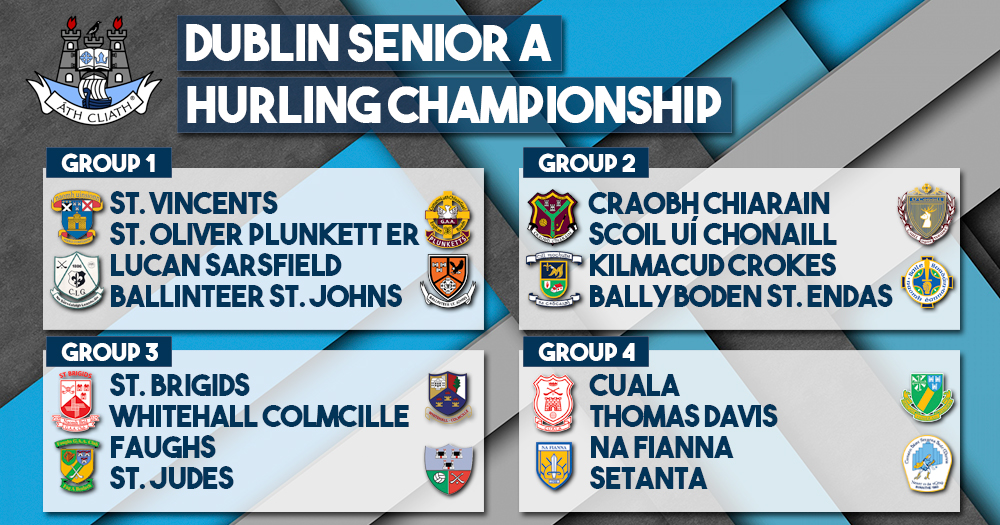 Just like the Senior Football Championship, earlier today the Group pairings for this year’s Dublin Senior A Hurling Championship were announced. Last year Cuala and St. Brigids contested the county final, with Cuala being crowned kingpins. It was St. Brigids first final since 2003, and the Northside club are still in search of their first title.

Cuala will look to retain the title against some hot competition. The Dalkey side have won the county title seven times. Scoil Ui Chonaill and Thomas Davis are newly promoted to the Senior A competition with Scoil capturing the Senior B title last year.

St. Vincents finished last season’s championship as Semi Finalists, losing to Cuala in the last four fixture. They’re grouped again with St. Oliver Plunkett Eoghan Ruadh who finished just below them in the Group 3 table. Lucan Sarsfield were beaten Quarter finalists last year after finishing runners up in Group 4. And Ballinteer finished bottom of Group 2 last year, and will be hoping to improve.

Scoil Ui Chonaill start their Senior Championship in a very competitive Group 2. Craobh Chiarain topped Group 3 last year and had a great run eventually losing to Brigids in the Semi Final. Kilmacud were runners up in last year’s Group 1. But their championship ended in the last eight when they faced and lost to Cuala. And Ballyboden St. Endas topped Group 4 falling to St. Vincents in the Quarter Finals.

Beaten finalists St. Brigids will go again, and will be confident with the Group 3 selection. Faughs, St. Judes and Whitehall Colmcille all finished last year’s competition in third position in Groups 1, 2 and 4. But a new year brings new players and a new challenge. And Brigids won’t want another long wait for their next final appearance.

Promoted Thomas Davis start life in Senior A paired in Group 4 with reigning champions Cuala, a start they would probably have preferred to avoid, but they’ll relish the challenge. Cuala will be in search of their eight title. Na Fianna topped Group 1 last year, but were stopped immediately in their tracks at the beginning of the knockout stages. Setanta finished their Group 4 campaign last year without a win. So there’s everything to play for.

Round 1 of this year’s Dublin Senior A Hurling Championship will be played between Tuesday March 31st and Thursday April 2nd.