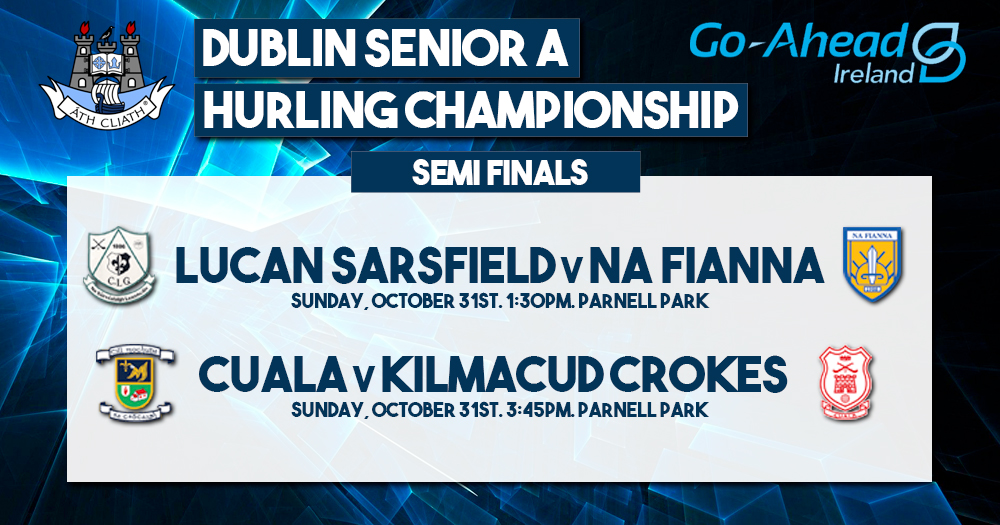 After three rounds of group games, and an epic quarter final weekend just two weekends ago, Sunday it’s time to the last four to fight it out for a place in this years Senior A Hurling Championship decider.

Group 1 and 2 winners Na Fianna and Lucan Sarsfield will square off in the first of two huge Semi Finals. Both will be staged in Parnell Park. After a 100% run in Group 2, Lucan were drawn against Craobh Chiarain in the Senior A Quarter Finals.

Craobh Chiarain were a point to the good heading into the last quarter with the sides on 1-12 to 0-14. But lead by Paul Crummey, their top scorer on the day, Lucan outscored Chiarains by 1-06 to 0-04 to finish winners.

Crummey’s 55th minute goal was crucial. Colm Walsh intercepted a quick puck out atempt by Craobh Chiarain and Crummey angled the ball low into the net. And it put Lucan 1-18 to 1-13 clear and firmly in the driving seat leaving Craobh Chiarain with nothing left.

Like their Semi Final opponents, Na Fianna ran unbeaten right through the group phase.  And were pitted against a hotly tipped St. Judes in their Quarter Final matchup.

Both sides pushed each other to the limit during normal time. Which meant two periods of extra time were in store for the Parnell Park spectators. Judes took a 3 point lead into the half time in extra time and it looked like Na Fianna were down and out. But Colin Currie, more importantly his free taking saw the Mobhi Road over the line. Currie hit six points in that second period with Donal Burke adding to their tally.

Having already met in the Group 3 Round Robin reigning champions Cuala and Kilmacud Crokes have already got up close and personal. Crokes bagged the psychological advantage from that 3-24 to 0-18 Round 1 win.

Ultimately that saw Crokes propelled to the top of Group 3 and were tied with St. Oliver Plunkett Eoghan Ruadh in their Quarter Final. And the dynamic duo of Alex Considine and Ronan Hayes inspired the Stillorgan outfit to a 1-26 to 0-19 victory.

Both forwards spearheaded the Crokes attack with Considine scoring 1-05 and Hayes registering 0-08 including four frees and a ’65. Considine hit the net in the 56th minute, sending Crokes into a 1-25 to 0-15 lead. Plunketts to their credit battled right to the end, hitting four late points. But a serious foundation had been laid to see Kilmacud Crokes power into the Semis.

For Cuala, they quickly got over that opening round loss to Crokes and powered through to set up a last eight clash with rivals Ballyboden St. Endas. And in what was the expected classic, the sides fought through extra time before Cuala pushed ahead to win on a 1-27 to 0-28 scoreline.

Points in injury-time of extra-time from firstly David Treacy and then Con O’Callaghan eventually separated the sides after they finished normal time on level terms, 0-24 to 1-21.

In a repeat of last year’s county decider David Treacy’s point from the terrace sideline in the second minute of added time edged Cuala ahead before O’Callaghan’s point, his fourth from play, sealed the deal just over a minute later.

The action gets underway at 1:30pm this Sunday, October 31st at Parnell Park. For tickets to either game just use the below links.

Join us at the weekend when we’ll have a look back at both Semi Finals and look ahead to the Dublin Senior A Hurling decider.

DUBLIN MAKE NO CHANGES FOR TRIP TO CLARE