Following their 2-16 to 0-16 victory over Offaly in the Bord Gais Energy Leinster U20 Hurling Quarter Finals, Dublin head for Carlow tonight to take on Wexford. The Goal? To  book a place in the competition decider which will be one of the first games of 2021 on January 3rd.

Two second half goals on the home straight in last weeks game in Birr was all the difference as Dublin saw off a spirited challenge from Offaly to secure a Semi Final spot.

In what became an enthralling contest, nothing seperated Dublin and Offaly coming into the close of the clash. With 52 minutes on the clock the sides were deadlocked at 0-14 a piece. That all changed quickly and Darach McBride and Kevin Desmond netted goals to get the Dubs over the line and into tonight’s game.

The game will be shown live on the Sport TG4 Youtube channel, with the winners going on to face either Kilkenny or Galway 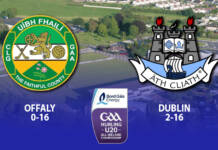 U20 Hurlers Advance to Leinster Semi Final With Win Over Offaly

Kenny Looking Forward To Step Up For Dublin Hurlers