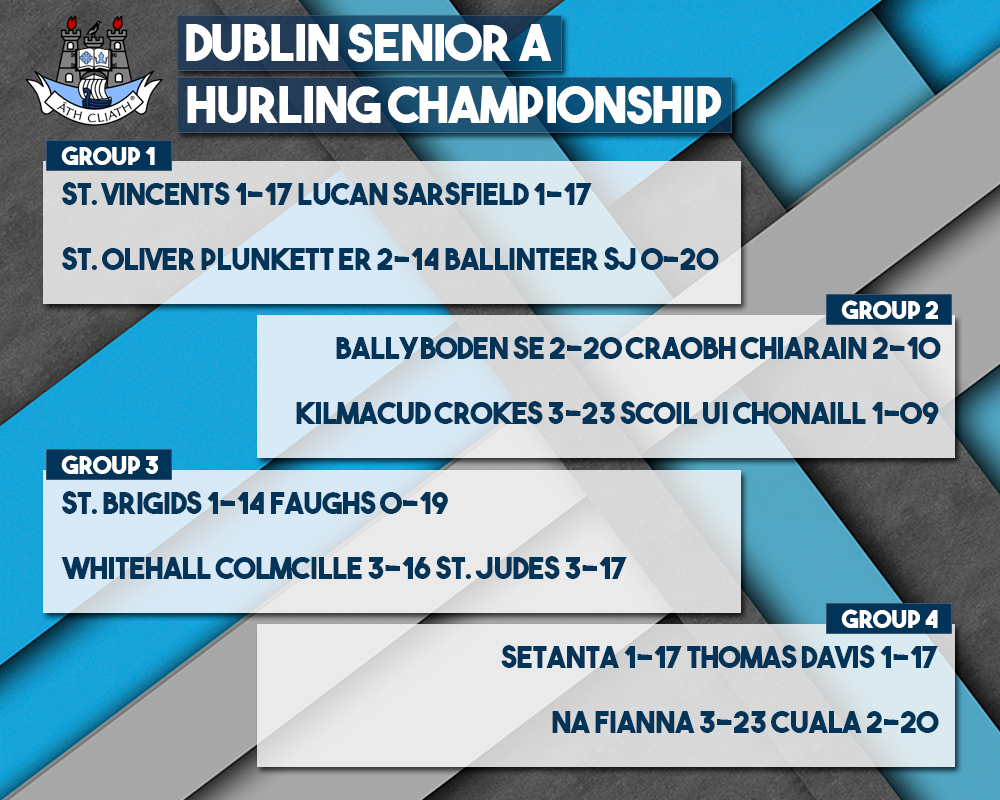 And in the blink of an eye, the Round Robin section of this year’s Dublin Senior Hurling Championship is over and we can look forward to the Quarter Finals. The four games of the last eight are scheduled to take place over August 22nd and 23rd.

This afternoon saw the action from Group 3 complete the eight teams that will compete, with Groups 1, 2 and 4 concluding yesterday.

Despite having a slight advantage coming into today’s final round, Whitehall become the nearly men. They were 1 point ahead of St. Judes in the table before the two sides clashed today, but it was Judes that secured the win, but not enough to secure a knockout slot. Only a score seperated them at full time with Judes edging the game by 3-17 to 3-16.

It was up to Faughs to upset the balance this afternoon and upset it they did. And as a result of their 0-19 to 1-14 win over already qualified St. Brigids, they secure the last quarter slot ahead of Judes.

We knew before today that St. Vincents and Lucan Sarsfield had already qualified for the last eight. And in one of the first throw ins yesterday afternoon at Parnell Park the sides played out a 1-17 to 1-17 draw to see them both finish on 5 points in the table.

Meanwhile over in O’Toole Park St. Oliver Plunkett Eoghan Ruadh and Ballinteer St. Johns also played out a sporting 2-14 to 0-20 draw to finish off their 2020 campaign. With no danger of relegation these two clubs can now enjoy the rest of the championship as onlookers.

Kilmacud Crokes, who were already through to the knockout stages of the competition, made it three for three yesterday evening. They were 3-23 to 1-09 winners over newcomers Scoil ui Chonaill at Silver Park. Scoil can look forward to another year at Senior A level knowing there’s no relegation battles this season.

Elsewhere Ballyboden secured their last eight slot, beating Craobh Chiarain in yesterday’s decider. Craobh still had the chance to qualify. But with Ballyboden building momentum since their opening day defeat to Crokes, they finished with ten to spare on 2-20 to 2-10

Just like Group 1, the meeting of Na Fianna and Cuala yesterday afternoon was to play for position as both had already secured their Quarter Final berths. But the game in Parnell Park was as entertaining as ever. Two first half goals saw Na Fianna continue the momentum they’ve shown right through the competition and at the break they lead Cuala by 2-11 to 0-12. In the second half another 1-22 from the Mobhi Road men saw them finish six points clear of Cuala to top the group.

And in almost a carbon copy of the Group 1 bottom of the table clash, Setanta and Thomas Davis played out a 1-17 a piece score draw to end the season for the two clubs.