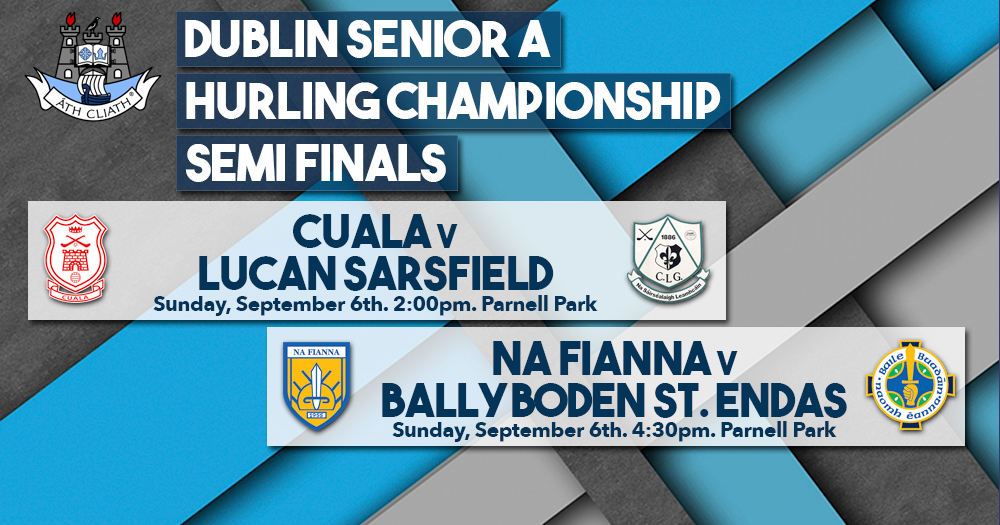 Four colossal clubs will try stake their claim on a place in the 2020 Dublin Senior Hurling Championship Final tomorrow afternoon. The action will be streamed live on DUBSTV and you can click here for all the details.

Of the four clubs Cuala and Ballyboden St. Endas have secured the coveted prize for the last five years. Cuala were three in a row winners from 2015 to 2017, winning it again last year. Ballyboden lifted the title in 2018. Lucan Sarsfield and Na Fianna are two sides in search of their first ever SHC crown.

Lucan reached the final back in 2013, but were beaten by Ballyboden on a 0-13 to 0-10 scoreline. Na Fianna have yet to feature in a Senior Hurling final. And tomorrow is their first semi final appearance since they were three time semi finalists between 1986 and 1988.

Of the sides competing tomorrow, the men from Mobhi Road are the only team unbeaten so far in this championship run. They successfully traversed the round robin phase picking up three wins. Most impressive of those was their 3-23 to 2-20 victory over reigning champions Cuala in the final round. What followed was a comfortable 0-16 win over Faughs in the last eight game. They led Faughs by five points at the break. But but early second half goals from Micheál Murphy and Martin Quilty saw the Mobhi Road men move clear of their opponents to finish at a canter.

A truly dominant second half performance in that game saw Boden run out comfortable 1-18 to 1-08 winners over the Marino side. They were four up at the Half Time mark and opened the second with four more to put them 0-14 to 0-06 before the 40th minute of play. Paul Ryan played a pivotal role in the second session from the dead ball, including a converted penalty which put the 1-17 to 0-07 ahead in 52 minutes.

Lucan finished their Group 1 campaign with two wins and a draw, only finishing below St. Vincents on score difference. And it was Vincents that they held to a 1-17 a piece tie in Round 1. They were 2-15 to 1-16 victors over St. Oliver Plunkett Eoghan Ruadh and followed that with a 2-18 to 1-14 win over Ballinteer St. Johns in the final round.

And it was Lucan’s work rate in their 0-16 to 1-12 win over Kilmacud Crokes that more than deservedly put them in tomorrow’s Semi Final.

Trailing 0-09 to 0-08 at the break, Sarsfields dug deep and all over the field there were heroes, Cillian Murphy being one of the stand out ones. Murphy pulled off two huge saves in the second half, one of those denying Ronan Hayes a penalty shot. Chris and Paul Crummey raised the intensity up front, while Ronan Smith and Johnny McCaffrey played vital roles in other areas.

Nine points seperated Cuala and St. Brigids when they went toe to toe in the last of the Quarter Finals. The 1-26 to 2-14 sees Cuala through to another Semi Final and another crack at retaining their crown.

A dominant first half, and without star forward Con O’Callaghan, Cuala ran out leading 0-19 to 0-08 at half time.

Having to settle for a 3-23 to 2-20 defeat against Na Fianna in the final round, the reigning champions had secured a 1-22 to 0-15 win over Thomas Davis in Round 1. They followed that with a 1-22 to 0-12 win over Setanta to put them in the running to keep their hands on the county title.