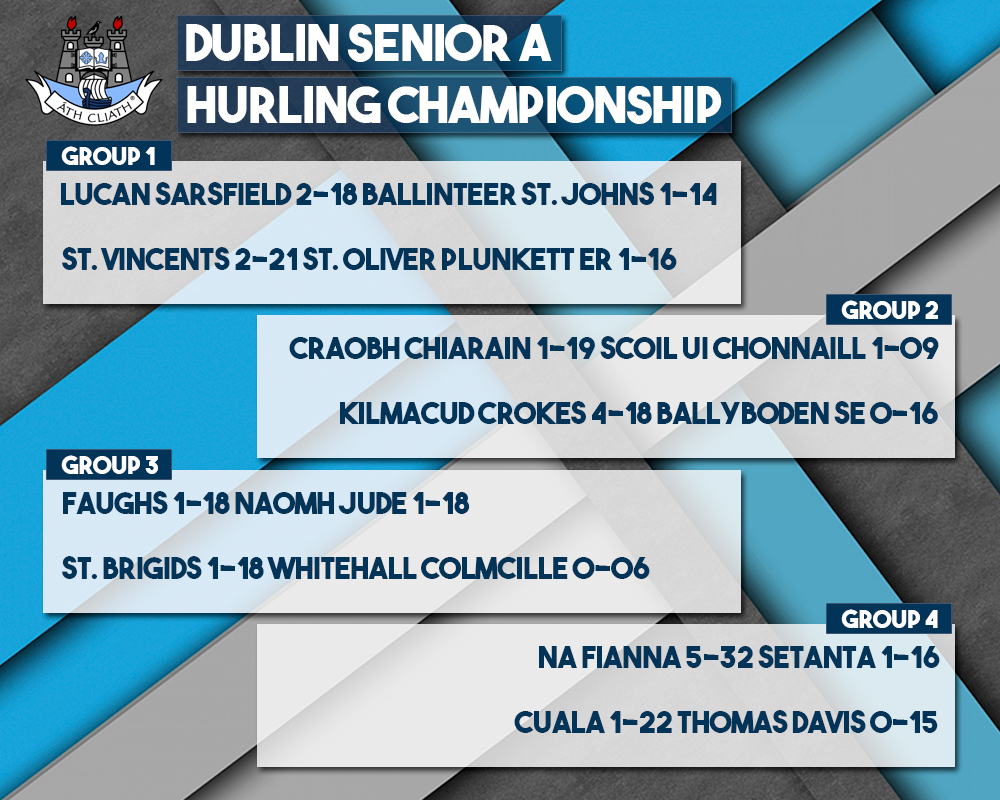 We’re up and running. And I’m sure you’ll agree that it was a nice feeling having some Dublin Senior Hurling Championship action to enjoy at the weekend. Yes, we’re all getting used to a new normal. But the positives of this year are really starting to shine through.

Over the weekend there was plenty of hurling action. And we now have the opening rounds of the Senior Hurling Championship completed. Here’s everything you need to know.

Dublin Senior A Hurling Championship – Round 1

Wins for St. Vincents and Lucan Sarsfield see both sides off the a perfect start in Group 1. And they’ll play one more game each before a huge clash in the final Round on August 8th.

Vincent’s welcomed St. Oliver Plunkett Eoghan Ruadh for their hurling opener to Marino and ran out eight point winners. Next up is a trip to Marley Park on July 29th to face Ballinteer St. John’s.

Ballinteer fell at the first hurdle to strong Lucan charge at 12th Lock. The home side finished seven scores to the good over St. John’s. Lucan will take the trip to Martin Savage Park next week for Round 2.

it won’t have been the start Scoil Ui Chonaill wanted as newcomers to the Senior ‘A’ Championship. But they came up against a hungry Craobh Chiarain in Round 1 at O’Toole Park. With a final score of 1-19 to 1-09 to Chiarains, it will see Scoil head back to Clontarf Road next week for another unenviable task. They’ll need to put on a show for Ballyboden.

Ballyboden looked like they needed some more preparation against a well tuned outfit in Kilmacud Crokes on Sunday. The televised game didn’t disappoint with the Stillorgan outfit putting four goals past Boden finishing on a 4-18 to 0-16 scoreline. Next weeks fixture between Crokes and Craobhs in Clonshaugh will be another contender for the tie of the round.

Last year’s beaten finalists St. Brigids got off to a bright beginning at Russell Park with a fifteen point win over Whitehall Colmcille. The 1-18 to 0-06 scoreline will send them to O’Toole Park next week to face St. Judes.

Judes played out a 1-18 a piece draw with Faughs at the Crumlin ground at the weekend. Faughs head for Cloghran next week for their Round 2 encounter with Whitehall. Both sides will be looking for valuable points.

Newcomers Thomas Davis had it all to do against reigning Champions Cuala on the opening weekend. And Cuala picked up right where they left off with a convincing 1-22 to 0-15 victory. They head for Setanta’s ground next week for Round 2, with Setanta looking for their first win.

Na Fianna handed Setanta a massive loss, winning 5-32 to 1-16 in a veritable goalfest on Mobhi Road for the start of their championship campaign. They’ll be confident on their trip to Kiltipper Road next week to take on Thomas Davis.