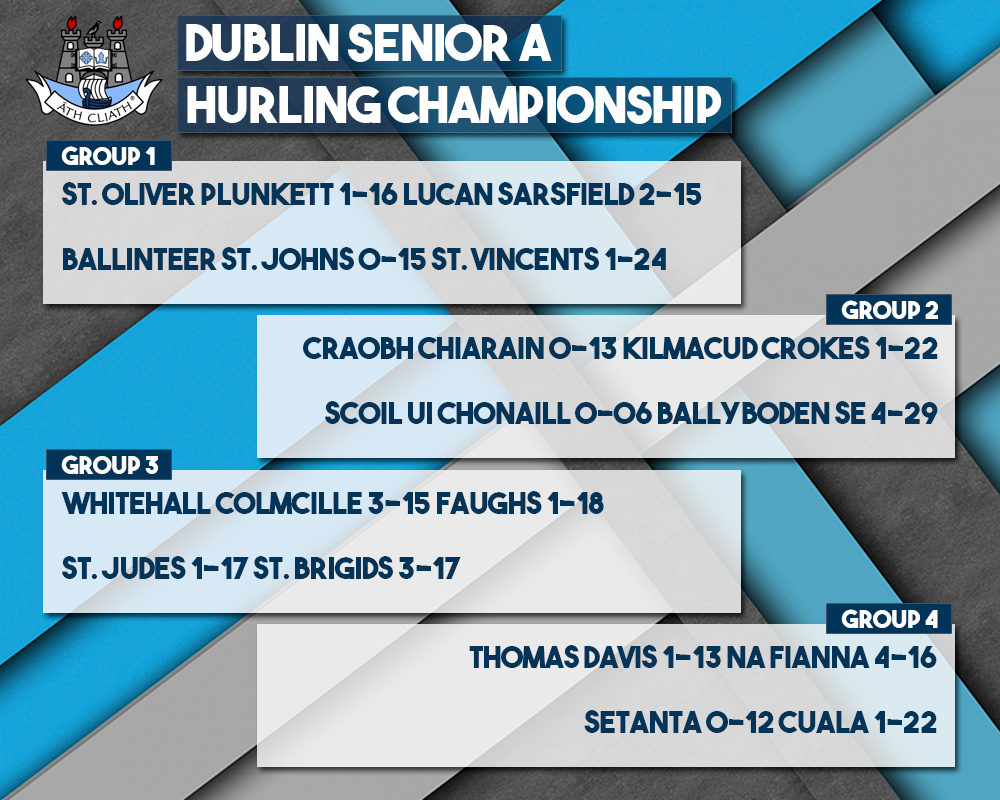 All 16 teams in this year’s Dublin Senior Hurling Championship have now completed two rounds of games. And as tonight’s results come in we’re getting an idea of how the knockout stages of the competition look. With one more round to go on August 8th however there’s still a lot to play for.

Dublin Senior A Hurling Championship Round 2

Lucan Sarsfield and St. Vincents will square off as table toppers in the final Round of this year’s Championship, and with score difference should both comfortably make the knockout stages.

Ballinteer and Plunketts will square off in Round 3 playing for pride.

Kilmacud Crokes are two for two and through to the next stages of the Championship before meeting Scoil Ui Chonaill in the final Round. Their 1-22 to 0-13 win over Craobh Chiarain tonight sees them securing their slot.

There’s another slot to play for when Craobh face Ballyboden St. Endas in Round 3. Boden dusted themselves off after defeat to Crokes in Round 1, beating Scoil by 4-29 to 0-06. Craobhs will be challenging for that second knockout slot after securing a win in Round 1 over Scoil.

While St. Brigids are two for two in Group 3, Whitehall Colmcille gave themselves a lifeline tonight with two late goals to steal victory over Faughs. Faughs led for the majority of the game but an impressive Whitehall finish saw them win 3-15 to 1-18.

Brigids overcame St. Judes tonight in Parnell Park on a 3-17 to 1-17 scoreline, meaning Judes will need a victory over Whitehall on Saturday week to stay in the hunt. Faughs face Brigids in the final round hoping to end on a high.

Reigning Hurling Champions Cuala and Na Fianna share the top spots in Group 4 before going head to head in the final round. Cuala were 1-22 to 0-12 winners over Setanta this evening, with Na Fianna beating Thomas Davis 4-16 to 1-13.

Thomas Davis and Setanta will fight for the remaining points in Round 3, with the other two teams deciding Group Winners and Runner up. The Cuala v Na Fianna could be the game of the Round.

O’Byrne And Walsh Cup Entry This Weekend In Parnell Park