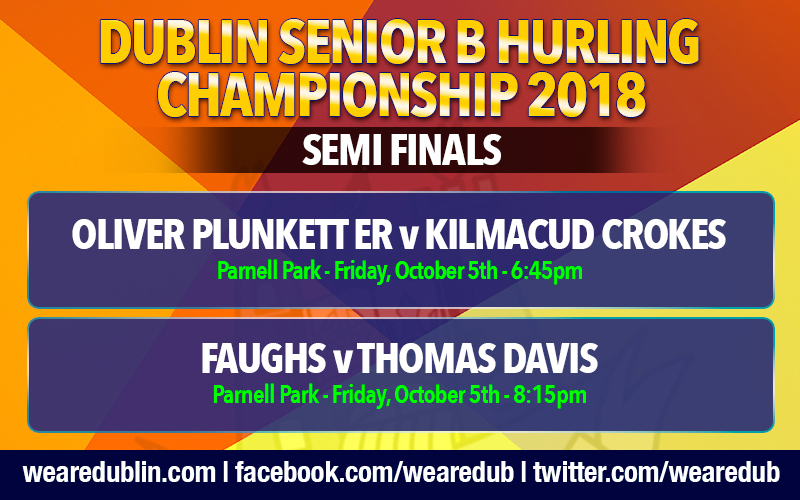 Plunkett Eoghan Ruadh recorded eight points from a possible ten in Group 1 of the Senior B Hurling Championship, and their only loss in the Round Robin was against their opponents tonight. But they mad absolutely no mistakes in their Quarter Final, Beating Ballyboden St. Endas 1-20 to 0-06 two weeks ago.

After their opening round loss to Crokes, Plunketts went unbeaten against Round Towers Clondalkin, Naomh Barrog, St. Pats Palmerstown and Castleknock. And seeing off Boden put them into tonight’s last four clash.

Kilmacud Crokes finished in third behind Plunketts and Naomh Barrog, beating Plunketts and Round Towers, but as it’s only a two group competition, Crokes found themselves in a Quarter Final facing Na Fianna. And on a score of 4-14 to 1-08 they made easy work of the Mobhi Road men.

Throw in for the first of tonight’s Semi Finals is 6:45pm

Thomas Davis finished two points clear of Faughs in the Group 2 table and were unbeaten in the Round Robin competition. In Round 5 these two sides played out a 0-19 to 1-16 draw which sent Thomas Davis into a Quarter Final against Castleknock. And fans at the Kiltipper Road venue saw Thomas Davis win by an eight point margin to advance to tonight’s Semi Final.

Faughs suffered defeat to Na Fianna in Round 3, but beat Parnells, Ballyboden, and Naomh Olaf to clinch the second spot in the Group. And following their Quarter Final win over Naomh Barrog, they’ll again meet Thomas Davis for a place in the Senior B Hurling final.

Throw in for this Semi Final is down for 8:15pm