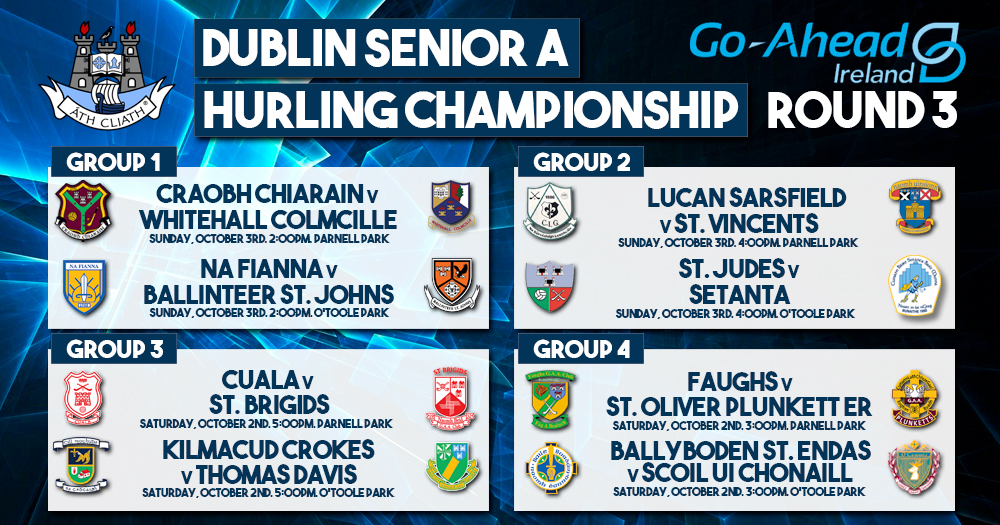 Things reach crunch time this Saturday and Sunday as we find out who will contest the quarter finals of this year’s Go Ahead Dublin Senior A Hurling Championship. And we could be in for some maths if things are tight. As it stands Na Fianna, Kilmacud Crokes and Ballyboden St. Endas have secured their postions in the last eight, with five slots still up for grabs.

In the event of two teams finishing level on league points in their groupings their direct head-to-head will decide their final positions, if this criterion does not separate the sides then scoring difference will be used.

If a situation occurs in a group where three clubs finish level on points (after the three rounds) then scoring difference between the teams from the games only involved those three teams (i.e. excluding scores against the side finishing fourth) will decide positions.

After convincing wins over Whitehall Colmcille and Craobh Chiarain, Na Fianna have secured a place in this year’s Quarter Finals. The outcome of this weekend’s game against Ballinteer St. Johns won’t matter too much in that respect but Ballinteer will be looking to end on a positive note.

With second place up for grabs in the table, it’s down to Craobh Chiarain and Whitehall Colmcille to stake their claim and move onto the knockouts. No one wants to leave the competition at this juncture, but sadly one will.

Lucan Sarsfield and St. Vincents square off in the final round. Lucan have already beaten St. Judes and Setanta and sit top of the group table. Vincents lost to Judes in the opening round, and beat Setanta by 4-30 to 1-12 in Round 2. Should they secure a win over Lucan they’ll top the group on the head to head rule.

It gets interesting in this group as Judes can also claim a quarter final slot if they beat Setanta on Sunday. We could be looking at a three way tie, but only if Judes and Vincents secure wins. If Lucan and Judes win they go through. And who’s to say Setanta won’t upset the whole thing?

We know Kilmacud Crokes are already through to the Quarter Finals with wins over Cuala and St. Brigids under their belts. They’ll face a Thomas Davis side who are desperate for a win after 2 losses.

Cuala and St. Brigids will contest for the second qualifying slot in the last eight. Both have picked up wins over Thomas Davis and been on the losing end of results against Crokes, but they battle it out to keep their the Championship alive.

Ballyboden St. Endas welcome Scoil Ui Chonaill on Saturday knowing their safe and secure with a last 8 spot. They’ve beaten St. Oliver Plunkett Eoghan Ruadh and Faughs to solidify their place at the top of the Group 4 table. For Scoil it’s a chance to end on a more positive note.

There’s a chance for either Faughs and Plunketts to move on a stay in the competition. But there’s only one slot left up for grabs. And we’ll know which team wil advance this Saturday evening.

Keep an eye here at the weekend as we wrap up the final round of action in the Senior A Hurling Championship.