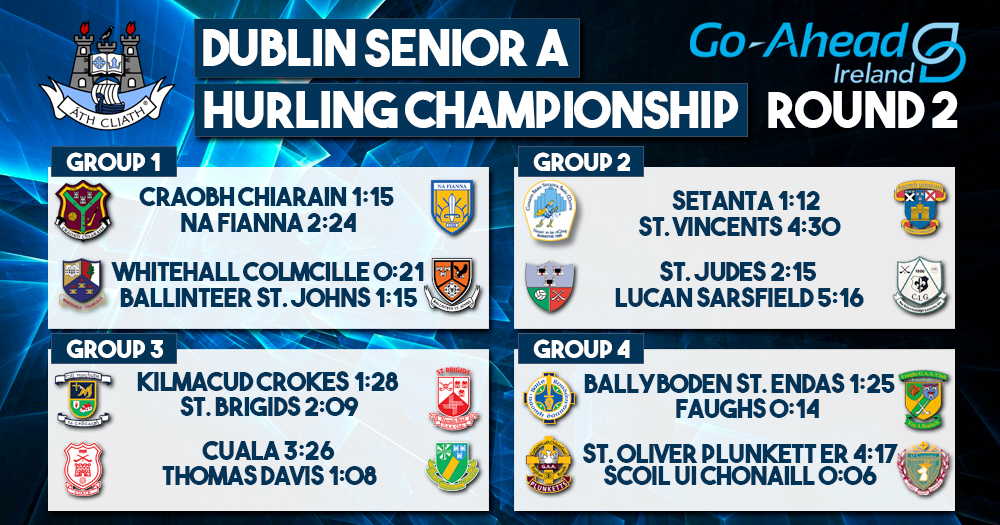 Since yesterday, the Round 2 fixtures in this year’s Go Ahead Dublin Senior A Hurling Championship have taken place. And ahead of the final Round Na Fianna, Kilmacud Crokes, Cuala and Ballyboden St. Endas have put themselves into good positions to advance to the Quarter Finals of the competition. But there’s still time for others to stay in the mix. Here’s the run down from all this weekend’s games.

Na Fianna secured their knock out slot this weekend with their second championship win. Their 2-24 to 1-15 victory over Craobh Chiarain puts them on 4 points with massive points difference of +35 ahead of their final round game against Ballinteer St. Johns.

After losing to Na Fianna in Round 1 Whitehall Colmcille put themselves back in contention, beating Ballinteer yesterday by 0-21 to 1-15 and they’ll take that win into the last round where it’s all to play for against Craobh Chiarain.

St. Vincents dusted themselves down after losing to Judes in Round 1 and picked up 2 vital points this afternoon in O’Toole Park. They secured a 4-30 to 1-12 victory over Setanta and will prepare for a battle with Lucan Sarsfield in the final round

Lucan’s fortune also changed in this round winning in a massive 5-16 to 2-15 goalfest in Parnell Park which has just ended. That puts Lucan, Vincents and Judes level on points with Setanta facing Judes in the final round.

Kilmacud Crokes remain unbeaten after 2 rounds as they saw off St. Brigids in the early game at Parnell Park today. Their 1-29 to 2-09 win puts them in the box seat ahead of a Round 3 clash against Thomas Davis.

A 3-26 to 1-08 scoreline sees Cuala back on track beating Thomas Davis this afternoon. They’ll face Brigids in Round 3, both sides battling for a last 8 slot.

Ballyboden St. Endas are in pole position in Group 4 after beating Faughs by 1-25 to 0-14 yesterday evening in Parnell Park. That puts them on maximum points before Scoil Ui Chonaill in Round 3.

St. Oliver Plunkett Eoghan Ruadh got their championship back on track yesterday at O’Toole Park beating Scoil Ui Chonaill by a massive 4-17 to 0-06. It’s Faughs up in the final round for Plunketts as both sides will battle for a knock out slot.

Next week attention turns once again from the Senior A Hurling Championship to the Senior 1 Football Championship as the eight Round 2 games will be played out between Friday and Sunday.

WHEN YOU’RE YOUNGER ALL YOU DO IS DREAM OF PLAYING FOR...