This Saturday and Sunday Round 2 of the Go Ahead Dublin Senior A Hurling Championship played out. 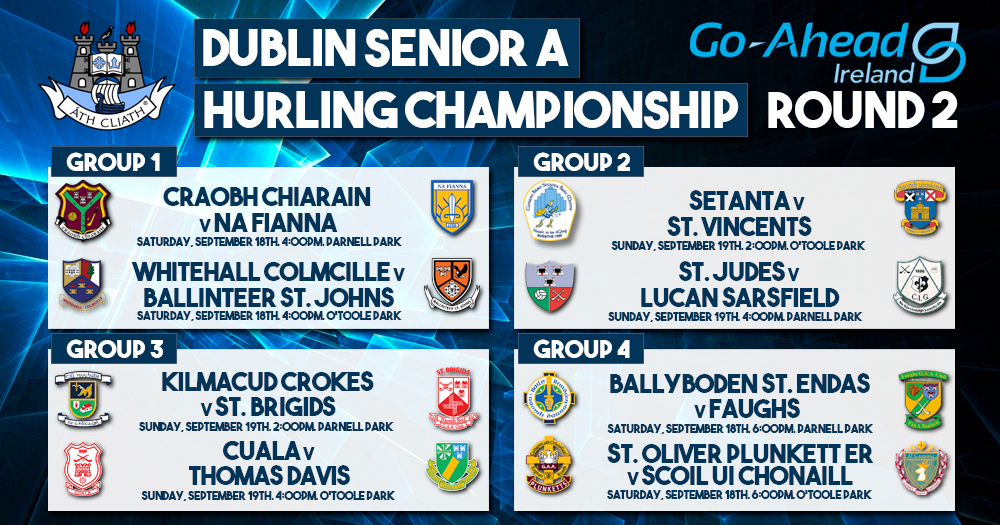 After the weekend’s Football Championship action, the focus again turns to the Senior A Hurling Championship. This Saturday and Sunday, Parnell Park and O’Toole Park will host Round 2 of the Championship as things hot up before the final round. Things will start to take shape in the four group tables and by Sunday evening we’ll certainly have a better picture of the knock out possibilities.

After a 3-20 to 2-14 win over Ballinteer St. Johns in Round 1, Craobh Chairain will take to the Parnell Park surface on Saturday to take on Na Fianna. Na Fianna were also victors in the opening round, beating Whitehall Colmcille by 4-27 to 1-13. So a win for either side on Saturday will all but secure a knock out berth.

Whitehall Colmcille and Ballinteer will battle it out in O’Toole Park at the same time (4pm) both looking for a boost to their chances before the final round.

At 2:00pm on Sunday in O’Toole Park, St Vincents will look to bounce back from their Round 1 loss to St. Judes as they take on Setanta. Setanta also lost to Lucan in Round 1 so both sides are looking for a first win.

Kilmacud Crokes had an impressive 3-24 to 0-18 win over Cuala in Round 1. And they’ll face a Brigids side on Sunday who were also victorious. Brigids put Thomas Davis to the swords in Round 1 by 2-24 to 0-12.

Thomas Davis and Cuala will be looking to get their championship back on track as they square off in O’Toole Park on Sunday at 4:00pm.

Round 1 winners Ballyboden St. Endas and Faughs will go head to head i Round 2 on Saturday evening in Parnell Park. Boden were 4-19 to 1-16 victors over St. Oliver Plunkett Eoghan Ruadh two weeks ago, with Faughs beating Scoil Ui Chonaill.

Scoil and Plunketts will face each other in the other Group 4 game at 6:00pm in O’Toole Park.

Be sure to tune in this Sunday for the results from all Saturday and Sunday’s games to close out Round 2 of teh Go Ahead Dublin Senior A Hurling Championship.