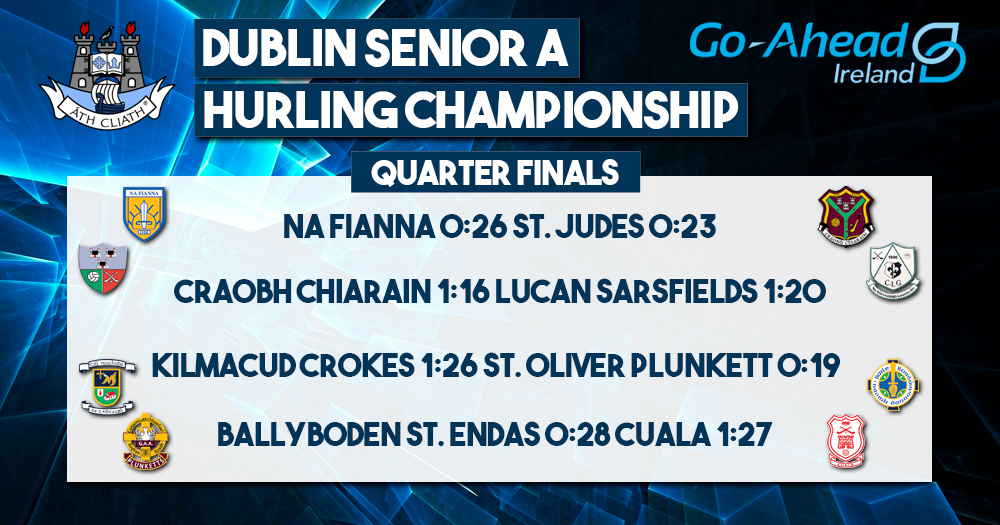 It was certainly a cracking weekend of hurling action. And before we turn our attention to thid weekend’s football action let’s wrap up the four quarter finals from the weekend Dublin Senior A Hurling Championship.

It took extra time to seperate Na Fianna and St. Judes in the first of Saturday’s Quarter Finals. And it was the men from Mobhi Road who finished the stronger after the second period of that extra time.

Judes had gone three points clear after the first session, but the freetaking of Colin Currie fired Na Fianna to victory. Six points from Currie and a score from Donal Burke gifted Na Fianna a three point advantage.

Holding a 0-10 to 0-08 lead at half time in normal time, Na Fianna were outscored with Judes had tied the game by the second half water break. And before the end of normal time the sides were level four more times, bring the game to extra time.

Lucan Sarsfields powered through the last quarter to turn a one point defecit into a four point win to secure a semi final slot in this year’s championship.

Heading into the closing quarter Craobh Chiarain held that one point lead, but Lucan outscored the Donnycarney side by 1-06 to 0-04.

The important goal came from Paul Crummey in the 55th minute, capping his tally at 1-04 for the day. It pushed Lucan 1-18 to 1-13 clear, leaving no way back for Craobh Chiarain.

Crokes Inside forwards Alex Considine and Ronan Hayes inspired the Stillorgan side to a 1-26 to 0-19 victory over Plunketts and book a semi final slot. Considine put in a man of the match performance, scoring 1-05, and Hayes registered 0-08. The 56th minute goal pushed Crokes 1-25 to 0-15 clear.

Plunketts battled right to the end, but left it too late to make a big enough impact on the scoreline.

The dream of three championships in a row is still alive for reigning champions Cuala as they battled through extra time see off the challenge of Ballyboden. A 0-24 to 1-21 scoreline forced the additional sessions. And it was points from David Treacy and Con O’Callaghan deep into injury of the extra time that eventually pushed the Dalkey men across the finish line and into the semis.

Treacy ended the game as top scorer on 0-13 (11f) as Cuala’s big game composure and experience came to the fore against a battling Boden side. And huge thanks will go to keeper Sean Brennan for stopping a Pearce Christie goal chance seven minutes of the second period of extra time.