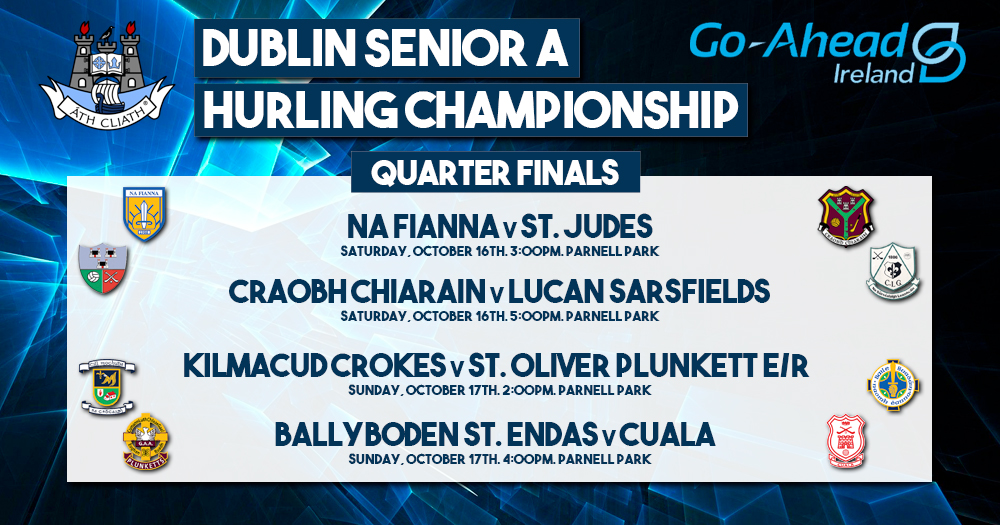 It’s that time of the year where things really start to hot up in the county Championships. And this weekend there are four massive games to commence the knockout stages of the Dublin Senior A Hurling Championship.

Na Fianna, Kilmacud Crokes and Ballyboden St. Endas had sealed their places in the last eight before the final round had even been played. They were eventually joined by Craobh Chiarain, Lucan Sarsfields, St. Judes, Cuala and St. Oliver PLunkett Eoghan Ruadh at the beginning of the month.

This year’s AHL 1 winners Na Fianna will take on St. Judes. The Mobhi Road men followed their league momentum with three Group 1 wins over Whitehall Colmcille, Craobh Chiarain and Ballinteer St. Johns. And it was their Round 2 2-24 to 1-15 win over Chiarains that sealed their last eight slot before even playing their final round game.

St. Judes finshed behind Lucan Sarsfields in Group 2 to advance to the Quarter Finals. After their opening round win over St. Vincents, they faced Lucan and lost in Round 2. But a 1-24 to 1-14 win over Setanta in the final round got them back on track to set up a date with Na Fianna this Saturday.

Three for three over Setanta, Judes and St. Vincents saw Lucan Sarsfields finish in the box seat in Group 2. It ended Vincents aspirations of a Quarter Final slot. Along the way they amassed a huge 7-57. Lucan last reached the championship final back in 2013 were they were beaten by 3 points by Ballyboden.

Their opponents Craobh Chiaran secured Round 1 and Round 3 wins over Ballinteer St. Johns and Whitehall Colmcille to put themselves in the frame to try reach their first final sonce 2009. Finishing behind Na Fianna in Group 1 gives Chiarains the Group 2 winners and a though encounter.

Sunday sees a repeat of last year’s Championship decider when reigning Champs Cuala go head to head with Ballyboden St. Endas. After 3 back to back titles for Cuala between 2015 and 2017, Boden clinched the title in 2018. But Cuala have reclaimed their glory since then and are again looking to another hat trick of titles.

Cuala have dropped point this year against Kilmacud Crokes to finish Group 3 runners up, with Ballyboden unbeaten in 3 Rounds to top Group 4.

In the second of Sunday’s Quarter Finals, Kilmacud Crokes will do battle with St. Oliver Plunkett Eoghan Ruadh. And there’s no denying Crokes calibre. Finalists in 2016, 2017 and 2018, the Stillorgan side have again ploughed their way through the Round Robin phase in Group 3 with convincing performances over Cuala, St. Brigids and Thomas Davis.

St. Oliver Plunkett Eoghan Ruadh picked themselves up after their opening round defeat to Boden and put in two good shifts over Scoil Ui Chonaill and Faughs to book themselves a Quarter Final slot

We’ll be sure the keep you informed over the weekend on all the Dublin Senior A Hurling action as eight teams will become four.

Cork Too Strong As Dublin Bow Out Of Hurling Championship

DUBLIN U17 HURLING TEAM NAMED FOR ALL IRELAND FINAL

Dublin Minor Hurlers Go In Search Of All Ireland Glory