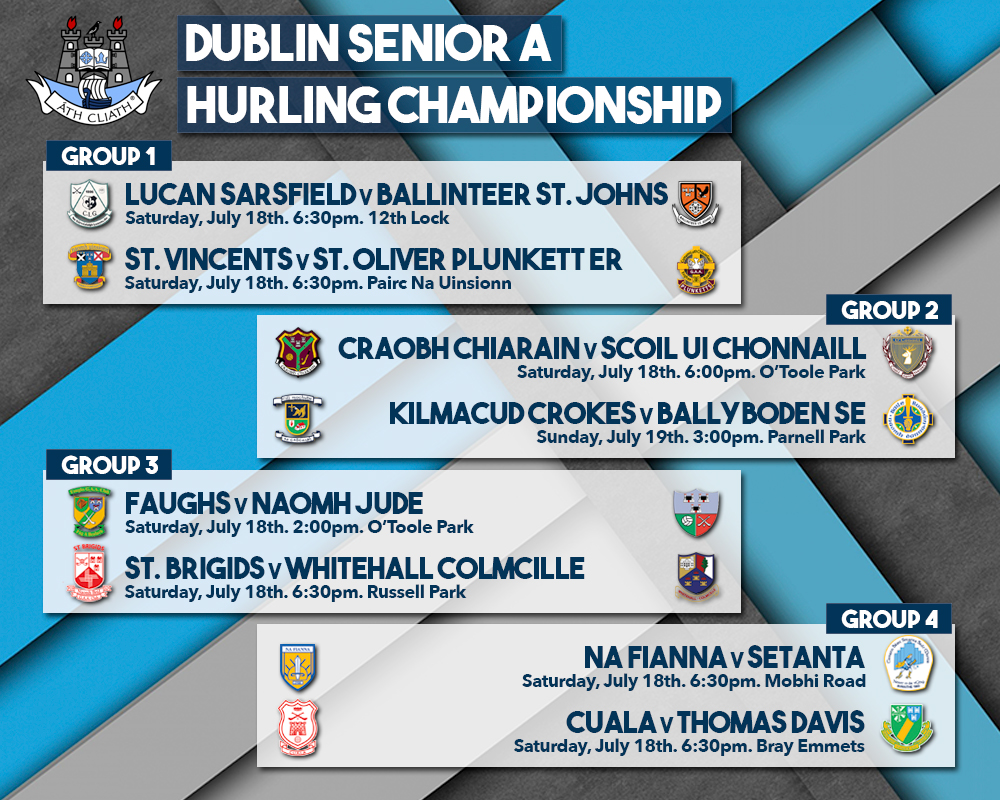 For fans of GAA, it’s been a long long wait. With the country going into lockdown back in mid January many have prayed this day would come. And this weekend in Dublin, the Senior A Hurling Championship takes centre stage. What was due to commence on March 31st has finally come around. We’re excited to get back to some action after over 3 months. And with a later then usual Round 1 here’s everything you need to know.

Dublin Senior A Hurling Championship Round 1

St. Vincents finished last season’s championship as Semi Finalists, losing to Cuala in the last four fixture. They’re grouped again with St. Oliver Plunkett Eoghan Ruadh who finished just below them in the Group 3 table. And that’s where they start their journey again this weekend. Lucan Sarsfield were beaten Quarter finalists last year after finishing runners up in Group 4. And Ballinteer finished bottom of Group 2 last year, and will be hoping to improve. Those two sides go head to head at the 12th Lock.

Scoil Ui Chonaill start their Senior A Championship in a very competitive Group 2. Their first opponents, Craobh Chiarain, topped Group 3 last year and had a great run eventually losing to Brigids in the Semi Final. Kilmacud were runners up in last year’s Group 1. But their championship ended in the last eight when they faced and lost to Cuala. And Ballyboden St. Endas topped Group 4 falling to St. Vincents in the Quarter Finals. What will be the fixture of the opening round between these two will be broadcast live from Parnell Park on TG4 this Sunday.

Beaten finalists St. Brigids will go again, and will be confident with the Group 3 selection. They start their route facing Whitehall Colmcille. Whitehall along with Faughs and St. Judes all finished last year’s competition in third position in Groups 1, 2 and 4. But a new year brings new players and a new challenge. And Brigids won’t want another long wait for their next final appearance. Faughs and Judes will square off in the opener of Saturday’s O’Toole Park Double Header.

Promoted Thomas Davis start life in Senior A paired in Group 4 with reigning champions Cuala, a start they would probably have preferred to avoid, but they’ll relish the challenge. Cuala will be in search of their eight title. Na Fianna topped Group 1 last year, but were stopped immediately in their tracks at the beginning of the knockout stages. Setanta finished their Group 4 campaign last year without a win. So there’s everything to play for.