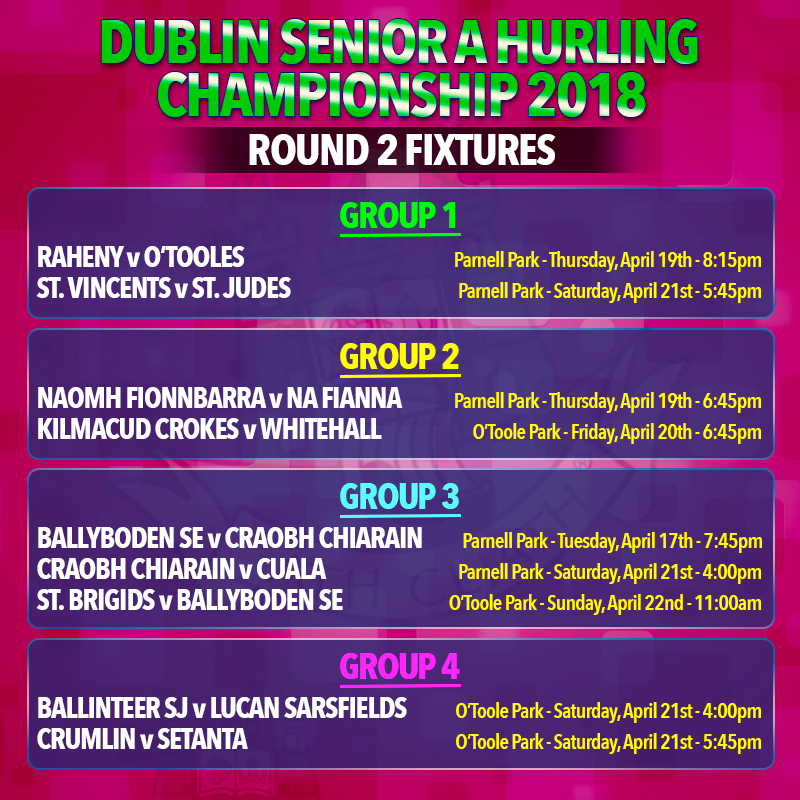 With the weekend’s Football Championship action all done, the attention turns again to the Dublin Hurling Championship. And with the weather affecting some games in Round 1, it’s an early start for a few of the teams in the Senior A and Senior B competitions.

Raheny and O’Tooles will play as part of Thursday’s Parnell Park double header. Both teams suffered defeat in the opening Round so this is an opportunity to catch up and earn valuable points. In the other Group 1 game St. Vincents will face St. Judes on Saturday, also in Parnell Park. Vincents saw off Raheny in Round 1 by twelve points, while Judes had a comfortable nine point win over O’Tooles.

Naomh Fionnbarra and Na Fianna will get their Round 2 going on Thursday in Parnell Park before the Group 1 game involving Raheny and O’Tooles. Finbarrs suffered a 15 point loss to Kilmacud Crokes in Round 1, while Na Fianna put in a storming performance to eventually beat Whitehall by 1-28 to 0-20. O’Toole Park is the venue this Friday for the Kilmacud Crokes v Whitehall Colmcille fixture with Crokes already firing on all cylinders.

Ballyboden and Craobh Chiarain will play out their Round 1 fixture at 7:45pm tomorrow night before starting Round 2. Chiarains will return to Parnell Park on Saturday to face reigning champions Cuala, who got their campaign underway with a 1-14 to 1-07 victory over St. Brigids. And Brigids will meet Ballyboden in O’Toole Park on Sunday morning hoping to get back on track.

It’s a double header in this group with both games being played in O’Toole Park on Saturday. Ballinteer St. Johns will face Lucan Sarsfields at 4:00pm and Crumlin do battle with Setanta at 5:45pm. Ballinteer beat Setanta by a solitary score in Round 1, while Lucan took Crumlin for thirteen on a score of 1-25 to 1-12 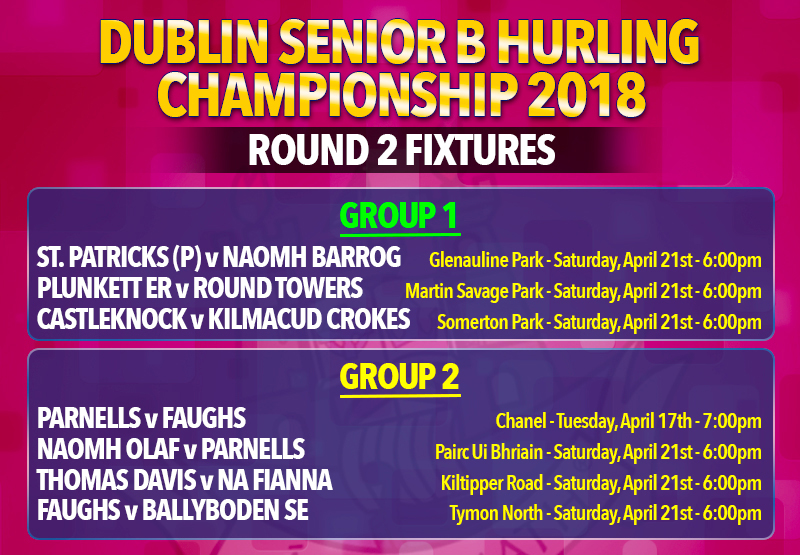 St. Patricks Palmerstown will meet Naomh Barrog in Round 2 in Glenauline Park. Pats were beaten by Round Towers in Round 1, and the Clondalkin side will face St. Oliver Plunkett Eoghan Ruadh in their Round 2 fixture in Martin Savage Park. Kilmacud Crokes, who beat Plunketts in Round 1, will take on Castleknock in Somerton Park. Castleknock lost out to Barrogs in the first round so will be looking to bounce back. All fixtures will be played at 6:00pm on Saturday, April 21st.

Parnells and Faughs will play their rescheduled Round 1 fixture tomorrow night in Chanel at 7:00pm before moving onto their Round 2 opponents. The Coolock side will then take on Naomh Olaf, who drew against Na Fianna in their opening game. The Mobhi Road men will travel to Kiltipper Road to face Thomas Davis who were victorious over Ballyboden on their opening day. And Ballyboden will be Faughs opponents to finish off Round 2.