Black Cards, red cards and penalties were the order of the day as Dublin and Waterford battle to share the points 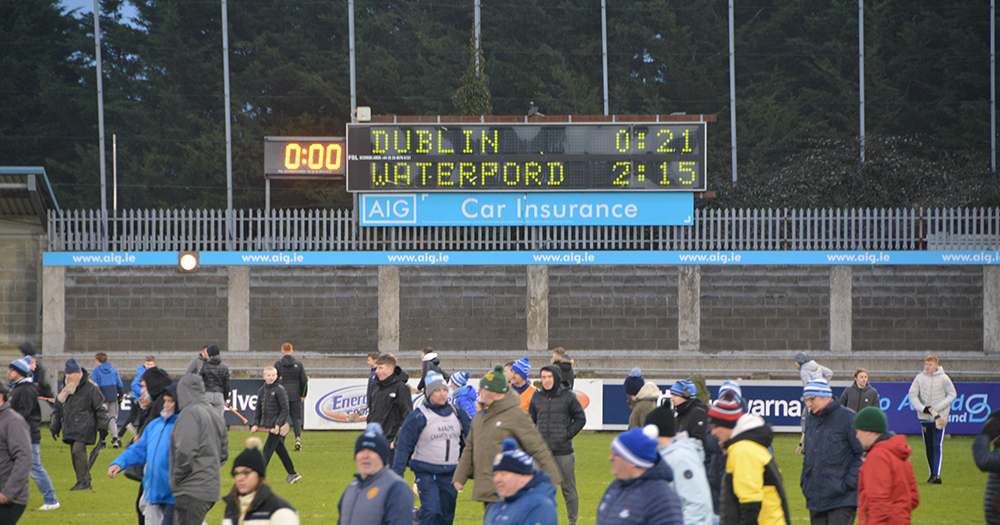 Any supporters coming to Parnell Park today expecting a muted start to this year’s Allianz Hurling League will have left entertained as Dublin hold on to their unbeaten start to 2022.

In a game that literally went down to the last exchange, the outcome could have went either way. Some will believe a draw may not have been a fair result. But with everything that happened during the 70 plus minutes it’s fair to say the scoreline balanced.

With the game level as many as seven times, both Dublin and Waterford threw everything at this League opener, knowing there will be tougher tests ahead and points are a commodity. The intensity of the game was on display from the throw in with plenty to talk about.

Referee Colum Cunning earned his wage and expenses today dealing out two red cards, two black cards and fourteen yellow cards. For Dublin boss Mattie Kenny, he’ll rue conceding two penalties, both scored by Stephen Bennet. But there’s a lot to be happy about as Dublin left everything on the field at their headquarters. Two late chances missed could have kept the points in Dublin, but the fact they played around 20 minutes of the game disadvantaged losing Cian O’Callaghan and Sean Brennan in either half will only strengthen their resolve head north to Antrim next week.

With a good breeze at their backs Dublin got themselves three scores in front. But a challenge by O’Callaghan on Colin Dunford soon saw him sin binned and the first penalty awarded to Waterford, despatched by Bennett.

Austin Gleeson gave further advantage to Waterford with a pair of scores, but when Dublin were restored to their full quota they hit seven points without reply. These included a monster score from Eoghan O’Donnell from inside his own half. Five frees from the ever improving Donal Burke saw Dublin go into the dressing room at half time up 0-11 to 1-04.

The first half saw 6 yellow cards doled out, and by the 49th minute that had increased to 12 after an off the ball scuffle between players halted the game for a lengthy spell. Scores from Burke increased Dublin’s lead by 0-13 to 1-06, but Waterford seemed to drive harder in the last quarter.

Austin Gleeson was causing problems, and when fouled set Bennet up to add another free. Bennet then sent a cross ball into Dunford to score. DJ Foran scored his second. Gleeson then found Jack Prendergast free and as Prendergast raced toward Sean Brennan, Brennan tripped the Waterford man to concede a second penalty. Dublin were forced to bring Alan Nolan from the dug out, but Bennet again converted. It gave Waterford a narrow one point lead.

The game ended with both free takers, Bennet and Burke, trying to outdo each other.

Conor Prunty received his marching order and Burke converted the resulting free. But Bennet replied at the other end to tie things up.

Burke had a late chance to edge Dublin over the line after Danny Sutcliffe wrestled posession back for Dublin but the attempt went wide and the referee blew time on the resulting puck out.