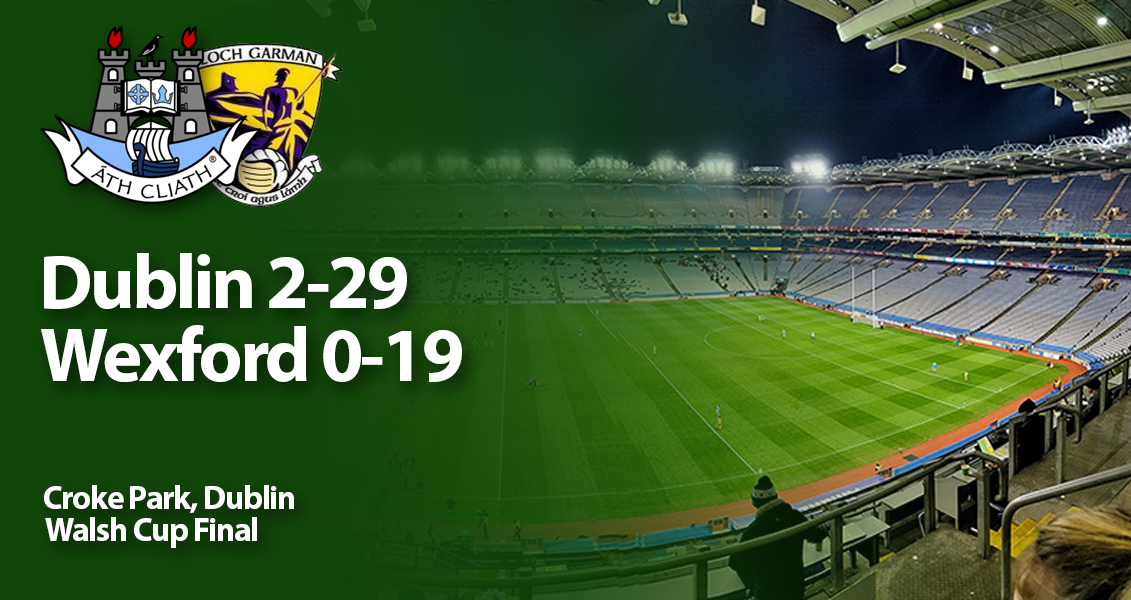 The wait for Mattie Kenny to collect silverware as Dublin Hurling Manager is finally over. In another strong performance from Dublin, the boys in blue were crowned Walsh Cup Champions tonight with a 2-29 to 0-19 victory over Wexord.

Dublin have now recorded a fourth straight win in only four weeks of 2022 with a 16 point win over a relatively strong Wexford panel. And it will really please Kenny as they now set their focus on Waterford next weekend in their Allianz League opener.

Overall Dublin’s passing and quick attacking style will have been a joy to watch for any neutral hurling fan, but it will have dragged Dublin’s hurling fans back to the days of teh Anthony Daly regime.

For Wexford, there will be concerned by conceding 2-29, as they prepare to face free scoring Limerick in their league opener. The men from the model county showed early signs they were in trouble shooting 10 wides in the first half. Dublin on the other hand looked in control form the throw in and with five of their six starting forwards scoring from play they were 11 points the better of Wexford at the break. Fergal Whitely registered 1-02 in the opening half, with Donal Burke once again proving to be the ace in the hole with 0-10 (9f) by the break.

There was never a feeling that Dublin would squander an opportunity, and the opening goal was case in point. An incredible surge from Whitely found Aidan Mellet at the back post. And even though Mellet’s return hand pass was blocked by Mark Fanning, Whitely didn’t miss an opportunity to tap the ball into the net.

Substitute Ronan Hayes was no more than a minute on the pitch when he registered Dublin’s second goal. And from there Wexford were all but out of the contest with an entire half of action still to be played. On the restart, any hope of a Wexford comeback fizzled out. They only scored twice in 12 minutes, while Dublin raced into a 17 point lead.

Conor Burke, Daire Grey, Aidan Mellett and James Madden added their names to the scorecard for Dublin, as they continued to look in complete control. And the contrasting fortunes of both sides, meant they could both empty their benches with virtually no impact on the game. Veteran Eamon Dillon registered two scores.

Billy Dunne did help Wexford’s cause with three frees, and along with Mikie Dwyer and Seamus Casey finished as their top scorers. A worrying statistic for Wexford, but for Mattie Kenny there will be the most positive dressing room of his tenure as the competitive season begins next week.