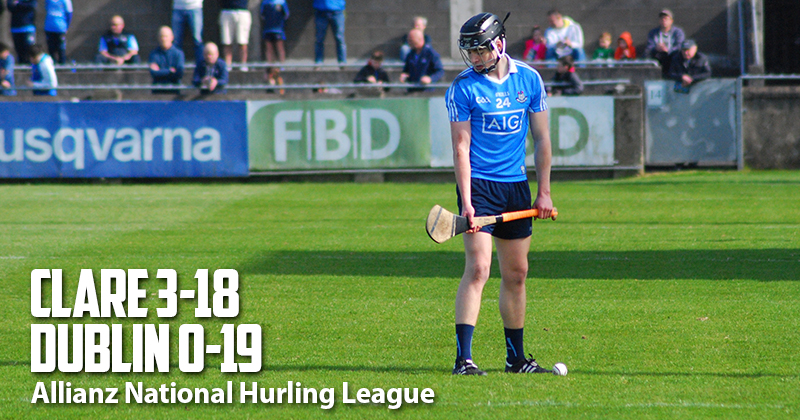 The Banner County cemented their Division 1A position this after beating Dublin in a fierce battle in Ennis. Second half goals from John Conlon and Tom Kelly proved too much for Ger Cunningham’s men and now they face the reality of relegation to Division 1B in 2018.

Dublin certainly had the better of the first half but a high wide count, two unbelievable saves from Clare keeper Andrew Fahey and an Aron Shanagher goal at the other end ensured that the Dublin would only lead by 2 points at the break.

Caolan Conway, Eamon Dillon, Niall McMorrow and David Treacy eased Dublin into a 0-04 to 0-01 lead by the 13th minute and the boys in blue looked comfortable. Donal Burke and Aaron Shanagher both missed easy goal chances and Clare keeper Fahey stopped a point blank shot from Dillon which could have changed the game.

But Clare grew in confidence and when a high ball delivered by Shanagher crept into the Dublin net, it put the Banner in the lead for the first time on 1-04 to 0-05 with fifteen minutes to go before the break.

Dublin, to their credit, did not sit back and played like a team who wanted it more, scoring eight of the remaining eleven scores of the half, three each from David Treacy and Donal Burke, to ensure they went down the tunnel leading 0-13 to 1-08

Clare emerged the more rallied side in the second half and within five minutes of the restart had notched 1-04 onto their tally, the goal coming from John Conlon, putting them in the driving seat on 2-12 to 0-13. A couple of score from David Treacy kept Dublin within 0-03 going into the last quarter of the action.

But disaster struck as a short Dublin puck out was intercepted by Tom Kelly and from 35 metres out he fired the ball into the net for Clare’s third and killed the tie. Scores from Chris Crummey and David Treacy (2) weren’t enough as Clare tagged another 0-04 on the make the final score 3-18 to 0-19 and secure their Division 1A status.