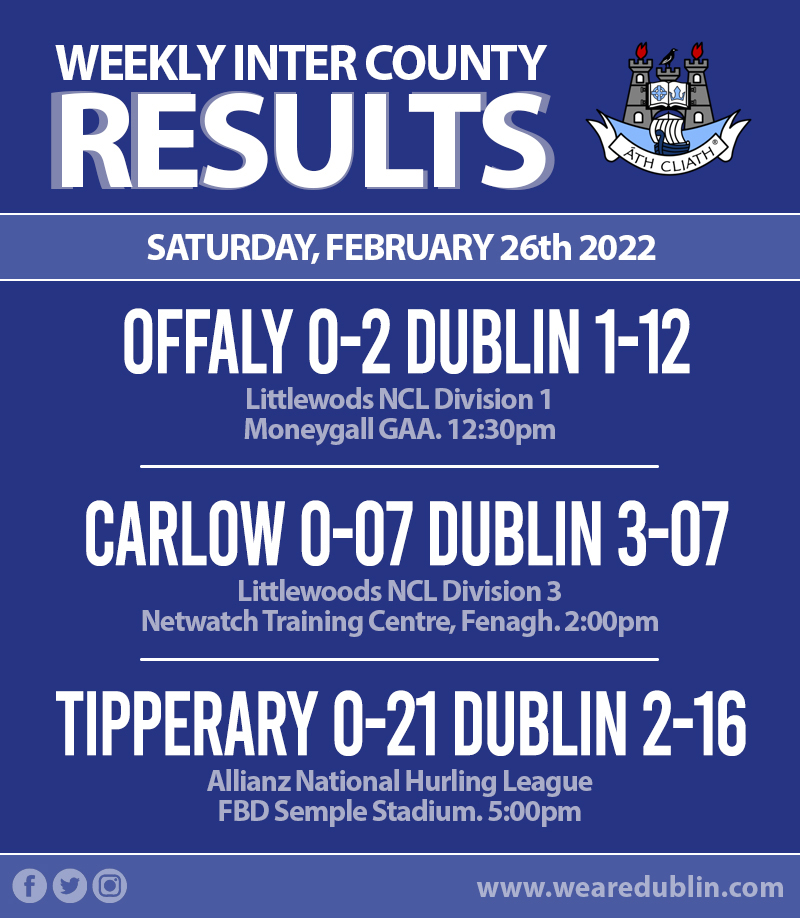 A busy weekend, and certainly a mixed bag of results. We went from a hugely positive Saturday with three ticks in the win column to a disappointing Sunday. But that’s inter county action. Let’s get you up to speed on all this weekend’s results.

After a last minute change of venue from Drumcullen to Moneygall, and in very windy conditions, Dublin’s Senior Camogie panel got their league campaign back on track with a comprehensive 1-12 to 0-02 victory over Offaly. And for the second game on the bounce newcomer Aisling O’Neill rose her head above the pack.

The Castleknock debutant bagged 1-05 of Dublin’s tally. Even taking up the deadball duties in the second half after Ashling Maher was replaced as an injury precaution. But one player does not make a team as Dublin shone all over the park. The returning Kerri Finnegan showed her worth as she upped Dublin’s tempo in the second half. Catching balls no one should ever catch she directed the traffic in Dublin’s front six. With Maher and O’Neill sharing 1-10 of Dublin’s tally, the extra points were picked up by youngsters Jody Couch and Niamh Gannon.

With the Seniors getting their League Campaign back on track, the Intermediate panel also took the opportunity, beating Carlow by 3-07 to 0-07 at Netwatch Training Centre.

After losing to Antrim last weekend, Jimmy Greville went back to the drawing board and made a raft of changes before heading back on the road. And those changes paid off with three goals seperating them and the home side at the final whistle.

Leading by a score on 1-04 to 0-06 at the break the Inters held Carlow to just one second half score as they reeled off 3-03 to dominate the game and secure a comfortable victory.

For the first time in what feels like a very long time, it’s a pleasure to continually use the word unbeaten when writing about Mattie Kenny’s Senior Hurling panel. And with expectations high last night Dublin left Semple Stadium with a hard fought but deserved one point win over Tipperary. And after results today they share the top spot in the Group B table with Waterford. A great position to be in welcoming Kilkenny to Parnell Park next weekend.

With 20 minutes to go Dublin had bossed themselves into a 5 point lead, thanks to goals from Rian McBride and Ronan Hayes. And it proved priceless as they faced a barrage of pressure from Tipperary who reeled off the last four scores of the game to get themselves within a score of drawing the game.

Late opportunities from Ronan Maher and Jason Forde to level the game failed to convert as Tipp saw their own unbeaten record end on home soil. And it was only the fourth time in eleven league and championship games that Dublin picked up a win in Thurles 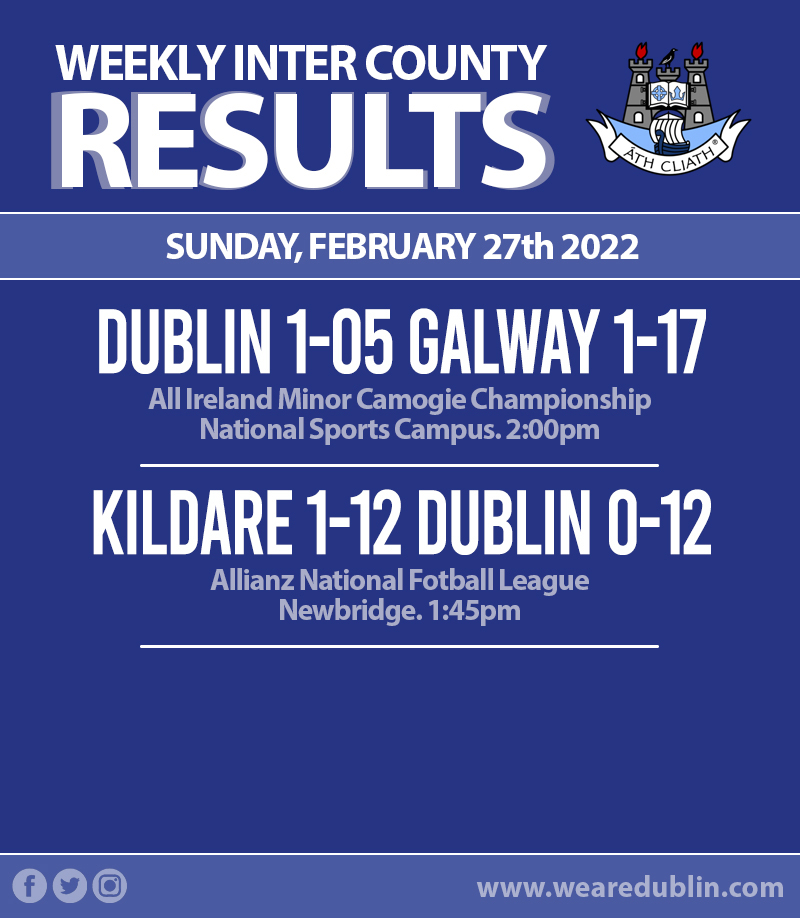 This afternoon was Dublin’s last chance to book their slot in the knockout stages of this year’s All Ireland Championship. And despite a valiant effort from John O’Connell’s side it was Galway who came away from Abbotstown with the victory.

After losing a good chunk of their panel this year, Dublin showed the spirit and determination associated with Minor Camogie in the county. And even though the scoreline shows a 12 point defecit it doesn’t reflect Dublin’s battling performance. Led by Sinead Daly scoring 0-04 today, and a goal from Ashling Nyham, Dublin never came down from their top gear for the entire hour of action.

it’s back to the drawing board now for the Dublin manager with time to prepare for provincial championship action later this year.

A fourth consecutive defeat for Dessie Farrell this afternoon. And it leaves a concerning shape to the remainder of the National Football League campaign for Dublin. And the prospect of Division 2 football next season is becoming more realistic with only three games remaining.

A Jimmy Hyland goal in the 49th minute proved vital for Kildare to secure them their first league win. Dublin trailed for the vast majority of the game. The sides were level on four occasions but the Dubs did lift the game in the early parts of the second half. Ultimately though the home side did what was needed to hand Dublin a fourth defeat.

And that’s the results wrapped up for this week. Join us from tomorrow for more news for the coming week.