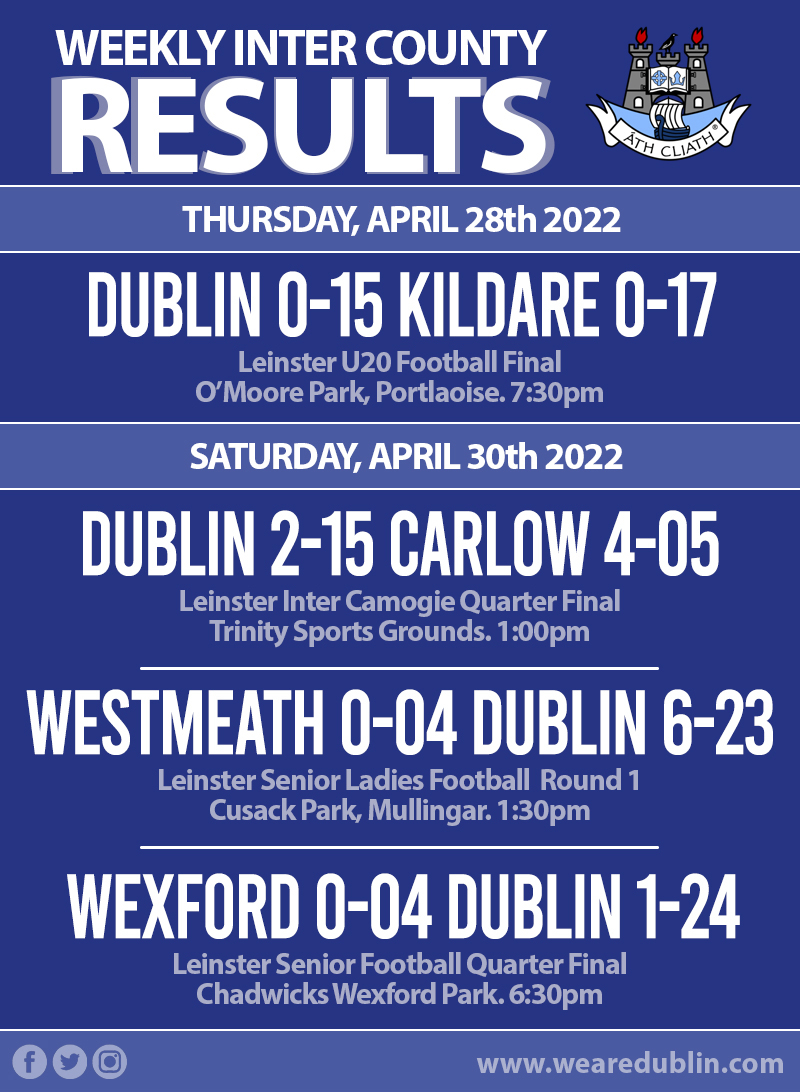 A disappointing end to Dublin’s Leinster U20 Campaign and the second consecutive defeat in a provincial decider. A close game, but Kildare just held on for the win to capture the title.

The game was on a knife edge for huge spells with the teams level on a number of occasions. Kildare had the edge quite a lot but Dublin dug deep at every time of asking, relying on Fionn Murray, Luke Breathnach and Ryan O’Dwyer for the majority of their scores.

Kildare advance to the All Ireland Series, and for the Dubs it’s back to the drawing board.

The Dublin Inter Camogie Panel got their Leinster Campaign off the a winning start with a 2-15 to 4-05 victory over Carlow, advancing to the provincial Semi Finals.

The girls in blue were 0-08 to 2-00 up at the break. Racing into a 0-05 lead with scores from Aoife Deegan, Ellen Baker, and Niamh Comerford, Carlow slowly started to come into their own and Ciara Qurke and Emily Doyle both rasied green flags to close the gap.

Kehoe’s first goal came after a long Aoibhe Dillon shot was blocked down by the Carlow keeper and the Dublin forward was on hand to flick to the back of the net. Her second was the result of a great solo run ending in the net.

Carlow would register 2 more goals in the game but Dublin were worth the money on Saturday afternoon, advancing to the Semi Finals.

Hannah Tyrrell and Carla Rowe registered a combined haul of 4-14 as defending champions Dublin heralded the return of the TG4 Leinster Senior Ladies Football Football Championship with a convincing victory against Westmeath at TEG Cusack Park.

In the first game played in this competition since 2019, Tyrrell (2-9) and Rowe (2-5) shone throughout for the Jackies. And Boss Mick Bohan will be hoping for more dominant results in this competion and beyond.

Having missed out on a fifth successive Brendan Martin Cup title to the Royals last year, Dublin were intent on hitting the ground running in the 2022 championship. And they made no mistakes in this opener. Bigger tests are ahead but this was an emphatic start.

A 23 point demolition and a definite return of the intent supporters have come to expect from Dublin in their Leinster Senior Football opener. And with yesterday’s draw made we know now we’ll face Meath in the provincial last four.

The return of Con O’Callaghan, and the masterful conducting by Brian Fenton had Dublin in control for the entire game, a much improved showing compared to the same fixture a year ago. Dublin were on the front foot from the throw in and never looked tested over the 70 minutes. It’s a contrast to recent form and football fans will be expecting similar results in the remaining Leinster competition clashes.

Leading by 0-10 to 0-01 at half time, O’Callaghan found the net off a Dean Rock attempt that rebounded from the crossbar.

It was a slow start with Fenton feeding Rock for the opener after 9 minutes of the first half. From there it was light work for the Dubs who will look to build on that in the Semi Final. 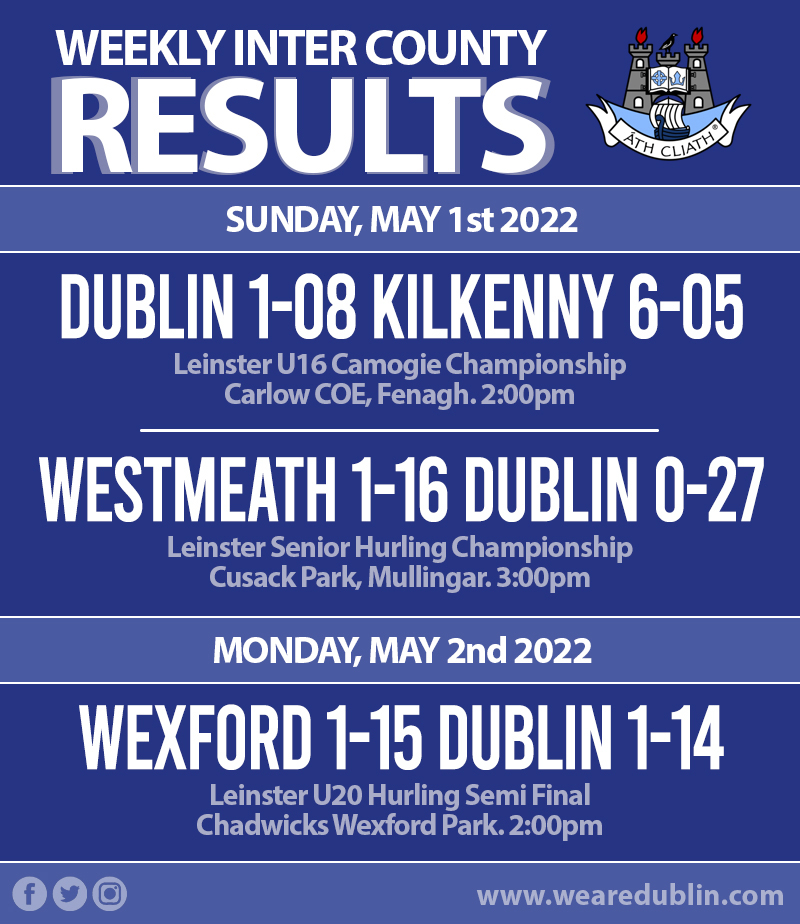 Kilkenny dashed Dublin’s hopes of a Leinster title yesterday afternoon in Fenagh, winning  by 6-05 to 1-08. But it took the majority the game for Kilkenny to shake off a spirited Dublin U16 panel in awful weather conditions.

A three goal blitz midway through the second half final saw Dublin come undone and Kilkenny took the spoils.

Despite the weather conditions, both sides should take credit in putting in fantastic performances. It was a shame there had to be a winner. And it was disappointing for Dublin who have grown in every game since their defeat to Kilkenny in Round 1. Yesterday’s game was worlds away from that opening encounter, but the results were similar.

Dublin only trailed by a point at the break after Eve Pennie managed to get the all over the line to give Dublin their goal and close a dangerously growing score gap. But Kilkenny drove on in the wind and rain on the restart. With 14 minutes remaining there was only a goal seperating the sides but Kilkenny would convert three goal chances between the 46th and 52nd minute, dominating the closing stages.

Another hard fought game and another hard fought win for Mattie Kenny’s Senior Hurlers. And that 0-27 to 1-16 win over Westmeath puts Dublin top of the Lenister Championship table after three games. They’ve got Kilkenny at home and Galway on the road but Dublin will be confident of a strong finish.

But like their game against Laois, Dublin had chances to pull away, not capitalising on them. At half time the score was only 0-12 to 0-11. Westmeath closed the gap in the second half with a goal in the in the final third. But Dublin’s reaction was positive and they saw the game out scoring five unanswered points.

Dublin welcome Kilkenny to Parnell Park on May 14th hoping to get revenge after losing to the cats in the National League on home soil and build on their three results so far.

It’s the end of the road for Dublin’s U20 Hurling Panel who narrowly lost out to Wexford this afternoon. The 1-15 to 1-14 result sees Wexford advance to this year’s provincial final.

For most of today’s game the sides couldn’t be seperated. Wexford had a 3 point lead of 0-06 ot 0-03 midway through the opening half, but Dublin clawed that back to draw level with a minute to the break. But Wexford got the last score before the half time whistle to give them a 0-07 to 0-06 advantage.

Within 2 minutes of the restart though, Wexford had registered a goal and a point before any Dublin response. They pushed that lead out to 5 points as the teams traded points. Dublin hit the net in the 9th to close the gap to 0-02. Captain David Crowe narrowed it further with a point.

The game remained that way until Dublin drew level on 1-11 a piece in the 45th. But Wexford were more economical with their shot selections for the remainder of the game and pushed out a narrow lead that Dublin couldn’t close off.

That’s all the results from the week. Join us again throughout this week as we look at another 5 championship games this weekend. Stay tunes for news and team announcements.