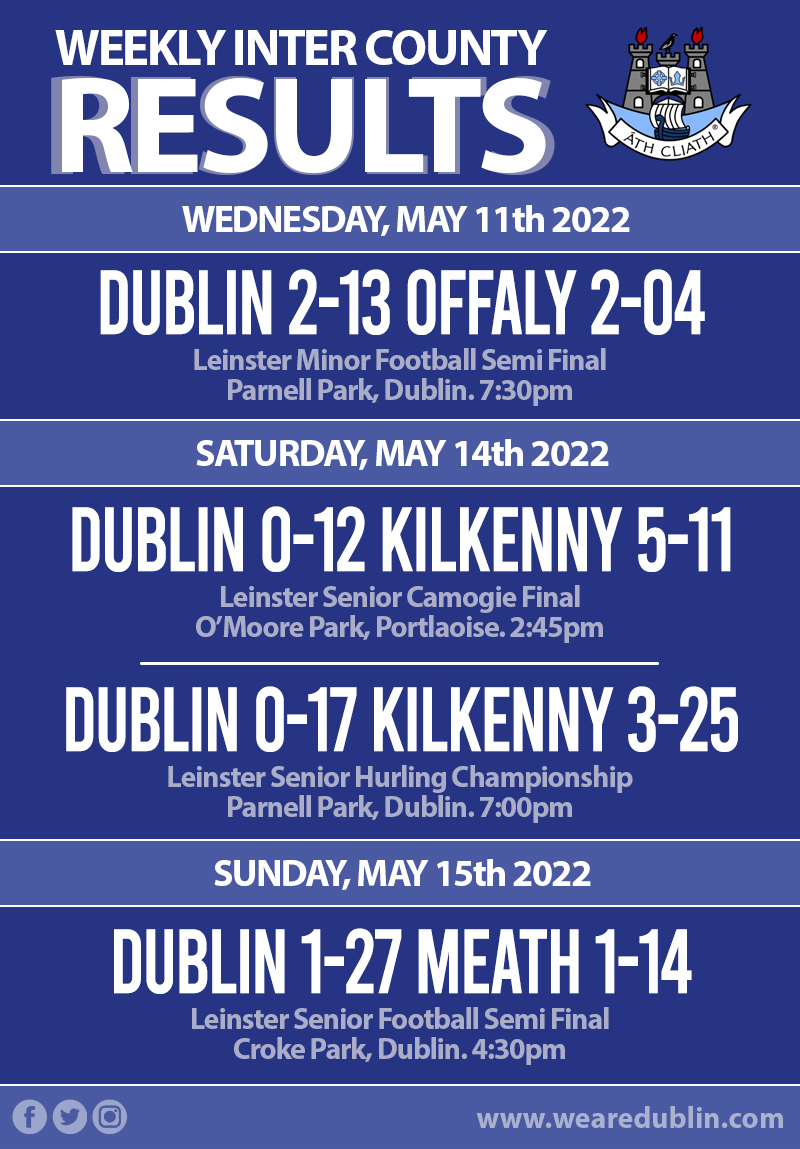 We’re just recharging after another busy week. And there’s plenty to talk about with details of four results to bring you. Let’s not waste any time.

Dublin proved too strong for their opponents Offaly last Wednesday night at Parnell Park, advancing to this year’s Leinster decider. With nine points to spare at the final whistle, Dublin’s young panel found the net early on as a Joe Quigley free dropped behind Sean Kavanagh into the goal.

At 1-05 to 0-02 at the interval, Dublin kicked on at the restart. Successive scores through Dylan Clark, Nathan Fitzgerald and Quigley kept them ticking. Offaly responded with a well-taken goal from Luke Kelly in the 43rd minute.

However, it failed to prompt a comeback as Dublin regrouped well through scores by Clark, Luke O’Boyle and Donovan before David Mulqueen and Niall Furlong traded inconsequential goals in added time.

A disappointing end to Dublin’s short Leinster Senior Camogie campaign with a heavy loss to Kilkenny in the provincial decider. But Dublin can now concentrate on this year’s All Ireland Championship.

Five goals by a well oiled Kilkenny saw they claim another Leinster title. Adrian O’Sullivan’s side stayed in touch with their opponents for the opening exchanges, but once Kilkenny took hold of the game, there was no stopping them. They ended the half on 3-07 to 0-06 and pushed on from there to land another 2-04 in the second half.

Credit must go to Dublin who never dropped in intensity throughout the game despite having to contend with a very impressive opponent.

After three straight wins in this year’s Leinster Senior Hurling Championship, Dublin were finally consigned to their first defeat. And it was a crunching loss as Kilkenny rebounded back after losing to Galway in the last round.

For a second time this year Brian Cody’s side visited Parnell Park and left with the spoils. This time the stakes were higher and the loss for Dublin means they’ll need to take a win away Galway in the final if they’re to qualify for this year’s Leinster Final.

Two Martin Keoghan goals and one from TJ Reid saw Kilkenny dominate the scoresheet, and dominate for large spells of the 70 plus minutes. Dublin only trailed by a goal on 1-11 to 0-11 at the break but the home side could only muster 6 additional points on the restart with Kilkenny chalking up another 2-14 in their tally.

Galway, Dublin, Kilkenny and Wexord are all still playing for those 2 Leinster decider spots so it’s going to teh wire and we could see score dfference play a major part.

over 38,000 made the trip to Croke Park yesterday to see Dublin put in another dominant performance in the Leinster Senior Football Championship. They followed their Quarter result over Wexford with another commanding win, this time over Andy McEntee’s Meath panel.

From the throw in this was a one sided contest with Dublin picking off their scores and stiffling Meath to their frustration. a 1-17 to 0-05 half time score told the tale of Meath’s woes and Dublin’s dominance.

Both goals in the game came from the penalty spot. Dean Rock converting after Con O’Callaghan was fouled by Eoin Harkin. Jordan Morris converted Meath’s penalty and minutes later was sent off after an off the ball incident with Lee Gannon. Michael Fitszimons got his marchig orders before Meath’s penalty. And Jack Flynn was sent off for Meath after a heavy challenge on Jonny Cooper.

But the game was over as a contest at half time as Dessie Farrell now looks to opponents Kildare in 2 weeks time.

And that last week’s results wrapped up. Make sure to stay tuned this week. We’ll bring you fixtures and the results from another four Leinster games starting with the Minor Football Final this coming Wednesday. We’ll round all of this week’s results on Sunday evening.

Dublin Camogie Seniors Get Championship Off To A Winning Start