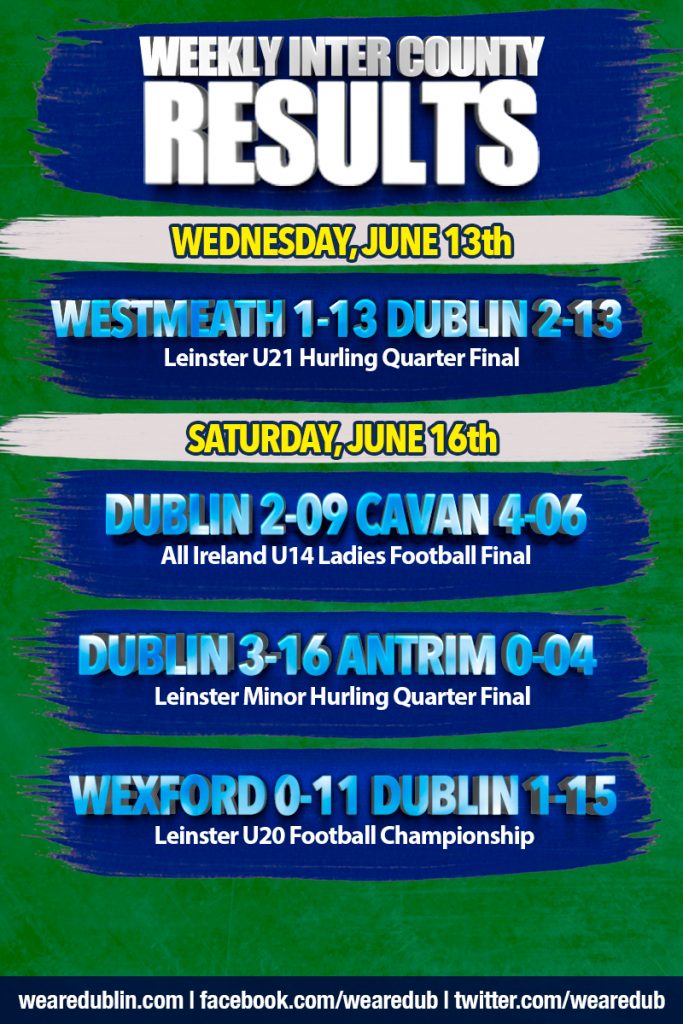 Another week has come and gone with plenty of games played across Hurling, Football and Ladies Football. So here’s what happened this week with Dublin’s various inter county teams.

Dublin’s U21 Hurlers made the trip to Cusack Park on Wednesday night and took on Westmeath in the Quarter Finals of this year’s Leinster Championship. And it was a successful away trip and the Dubs came away with the win, beating the midlanders 2-13 to 1-13. Two Donal Burke goals on the night was enough to close out the game and set up a Leinster Semi Final clash with Wexford next Wednesday in Parnell Park.

All Ireland U14 Ladies Football Final

Our U14 Ladies travelled to Dunleer yesterday with their sights on an All Ireland Championship, with Cavan standing in their way. But despite a hard fought battle it was the girls from Cavan who got across the line to lift the silverware this time around. The Dubs have had a fantastic season and can hold their heads high, looking forward to 2019.

It was Quarter Final day yesterday in the Leinster Minor Hurling Championship, and Dublin hit the road to Dowdallshill GAA to take on Antrim for a place in the semi finals. And by 4:00pm the boys in blue had put in an amazing shift, beating the men from the north by 3-16 to 0-04. Dara Purcell, Luke Swan and Seamus Fenton all raised green flags as Dublin romped to victory and will now face take on Wexford in the semi next weekend.

Tom Gray’s Dublin U20 Footballers finished the round robin section of the new Leinster Competition unbeaten as they were victorious over Wexford yesterday afternoon in their own back yard. Trailing 0-05 to 0-08 after the first half, the Dubs came bursting out of the block for the second period, and a Ross McGarry goal turned the game on its head as Dublin loaded the pressure onto Wexford. And substitute Tom Keane contributed 0-04 to help Dublin comfortably over the line. This gives Dublin an automatic spot in the Semi Finals and they’ll know their opponents following next weekend’s Quarter Final games.

Three wins from four isn’t a bad week at all. Join us again this week for more inter county action with more Hurling, Camogie and Football action to look forward to.

DUBLIN BEGIN THE DRIVE FOR FIVE THIS WEEKEND