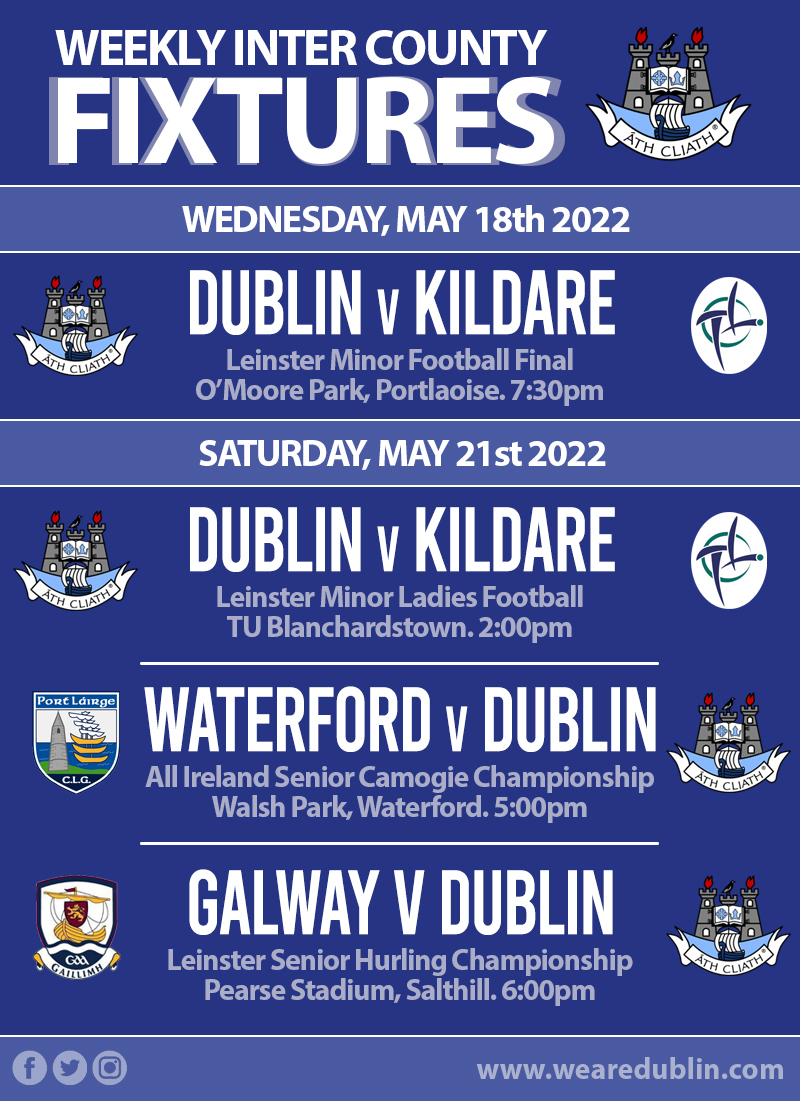 After a mixed week last week, we turn our attention to some big fixtures ahead. There’s a Leinster Final, two final round games in the provincial competition, and we also see the beginning of an All Ireland campaign. So let’s not waste any time and get into the details for these fixtures.

Since Mid March, the Dublin Minor Football panel have applied their craft well to reach tomorrow’s Leinster Final against Kildare. Across three round robin fixtures, Dublin pulled in confident and comfortable wins over Louth, Laois and Westmeath, to qualify for their last four clash against Kildare tomorrow night.

Kildare also went three for three in their group, beating Offaly, Longford and Meath. And they added a semi final won over Wicklow last Wednesday for the chance to face Dublin in the decider.

Dublin have not won this competition since 2017, but have been twice finalists since then, losing to Meath last year, and Kildare in 2019. It was the last time Kildare were crowned champions, so both sides will be hoping to get their name etched one more time on the Leinster Trophy.

It’s win or bust for Dublin’s U16 Ladies Football panel as they square off against Kildare this Saturday in the final round of this year’s Leinster Championship. They come into the weekend’s tie against Kildare with some momentum, beating Laois in Round 2 by 2-14 to 2-02.

That result saw Dublin recover from a 4-14 to 1-08 ls to Meath in the openin round so the girls will be hoping TU Blanchardstown brings them a little more luck than they had in Round 1.

There will be no time to dwell on the disappointment of losing in a Leinster Final only a week ago. Adrian O’Sullivan will need to get his Senior Camogie panel focused on an even bigger task. The Glen Dimplex All Ireland Championship.

Dublin showed great promise in their recent semi final against Westmeath, and a really positive attitude despite losing to Kilkenny last weekend. They’ll need to bring that attitude into their opening game in Waterford.

After this weekend, they’ll face Tipperary, Cork, Clare and Wexford, hoping to reach the knockout stages of the Championship. And their goal has to be at least a Smi Final slot to end the year on a postive note.

It’s a massive weekend for Mattie Kenny’s Senior Hurlers as they travel west to Salthill and try save their Leinster Championship. Up until last weekend, Dublin were sitting top of the group table following three wins over Laois, Wexford and Westmeath. But that winning run ended on Saturday after a crushing defeat to Kilkenny at Parnell Park.

As it stands now, Dublin are third in the hunt for a Leinster Hurling Final slot. Equal on points with Kilkenny and a point behind Galway, who they play this weekend. A win in Salthill is a big ask but not at all impossible. And that would guarantee them a slot on the decider. A draw would also be enough, but Wexford would need to beat Kilkenny.

There are four sides in the hunt, and on Saturday all bets are off when it comes to the ending in this provincial competition.

As always, join us throughout the week for news, team annoucements and more as we follow these fixtures through to their conclusion.