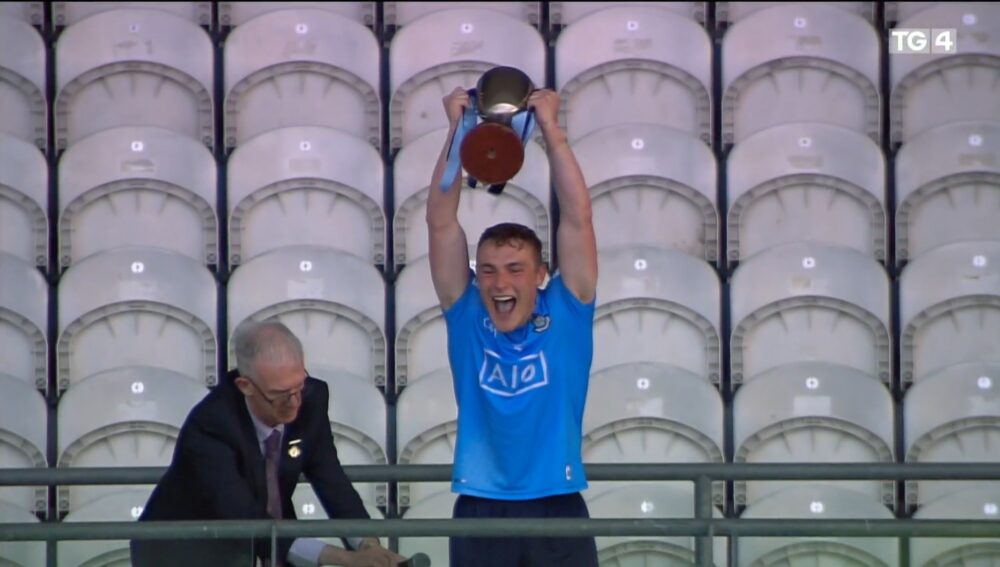 A competition that could have been lost by everything that’s happened since March of last year. Many false starts, many cancellations. But finally, Dublin come away from O’Connor Park in Tullamore as Leinster U20 Hurling Champions.

Nothing separated the sides throughout an enthralling second half with both Dublin and Galway flexing their scoring muscles. Free takers Liam Murphy and Donal O’Shea kept the scoreboard ticking. And both sides had second half goal chances.

8 minutes after the restart John Fleming traversed a space in the Dublin defence only to have his shot stopped confidently by Eddie Gibbons in the Dublin goal. And after the second half water break, Liam Murphy had a similar chance at the other end but TJ Brennan managed to get the boss of his hurl in the way to block the Dub from raising their second green flag.

Dublin led by 2 scores as the half took on a point for point feel, with the teams level as many as six times. And while Galway got the opening 3 scores on the restart from Fleming and O’Shea and Mark Kennedy, Dublin were relentless.

Darach McBride and Micheál Murphy quickly had the Dubs back on top, but Ian McGlynn levelled on 5 minutes. The Tribesmen again took the lead, and at the water break O’Shea had converted two more frees to give Galway a 1-15 to 1-13 advantage.

Two scores from player of the match Lee Gannon drew Dublin level again. And for the rest of the game is was point for point. Murphy was the difference at the close of the game registering three frees to cancel out scores from Mark Kennedy and Fionn McDonagh

Dublin held a one score lead at the first half water break. Gannon and Kennedy traded scores inside the opening minute. Dylan Shaughnessy and O’Shea pulled Galway 2 ahead. But a Purcell point before the 10 minute mark was the precursor to Mark Sweeney running straight through the middle of the Galway defence to blast the ball past Darach Fahy and into the bottom corner of the net for a Dublin goal.

Kennedy responded for Galway with a point at the other end before Murphy added another for Dublin. In a fast paced half, Murphy converted his first free and Kennedy responded again to keep the deficit to one point.

Murphy found his range again on the water break restart. But it was short lived as John Cooney managed to tap the ball down behind Eddie Gibbons to make it 1-06 a piece heading into the last 10 minutes of play. Another Murphy free and a fine score from Purcell gave Dublin a 2 point lead.

Six minutes from half time O’Shea sent over a ’65, and 2 minutes later converted a free to level the game. He added another on 28 minutes to give Galway a slender lead. That lead lasted a minute with Darach McBride levelling. And Murphy and goalkeeper Eddie Gibbons finishing out the half with 2 converted frees.