Pat Gilroy’s Dublin Senior Panel now know what victory tastes like in this year’s Leinster Hurling Championship following a more than convincing result over Offaly in front of a packed Parnell Park this afternoon.

It means Dublin will stay in the Leinster Championship next year, while Offaly drop to the Joe McDonagh Cup, finishing bottom of the table in the new Round Robin format. And regardless of the result in Dublin’s final game against Galway next weekend in Pearse Stadium, the boys in blue can look forward to top flight championship action again in 2019.

Today’s game was the polar opposite to the meeting of these two teams at the beginning of the Allianz Hurling League in Croke Park earlier this year. Dublin were the dominant force today, but will also be sorely disappointed in their hurling, with a wide count in excess of 15 missed opportunities.

That said, the Dublin manager will have been more than impressed with how his defence handled every challenge Offaly threw at them for the entire game.

A Joe Bergin free got Offaly off the mark in the 3rd but that was soon cancelled out as Shane Barrett scored the first of his four superb points, quickly followed by one from midfielder Rian McBride. Dan Currams levelled things immediately at the other end as Offaly looked to score from deep as their attack was systematically broken down by Paddy Smyth, Cian O’Callaghan and Eoghan O’Donnell, who return to his normal role in the Full Back line.

Chris Crummey, Paul Ryan and Barrett would add another 0-03 before Currams would score again, making it 0-05 to 0-03 by the 15 minute mark. Ryan would deliver the next three Dublin scores, with a Bergin free tucked in between them, and again just after to keep the gap to 0-02.

Dublin got out of jail though in the 29th, when a high ball found Offaly’s Sean Ryan in a dangerous position, and from it a scramble ensued in the goal mouth. The Dublin defence literally swarmed the area and managed to clear the danger to Chris Crummey who drove a long ball hit and over the bar at the other end to finished the phase of play.

Fergal Whitely and Shane Barrett both scored additional time points to extend the lead before another menacing long delivery from Crummey found Liam Rushe, who delivered it to Paul Ryan and he made absolutely no mistake rocketing the ball past Eoghan Cahill to give Dublin an eight point cushion at the break.

With Offaly desperately needing scores, Bergin obliged again with opening score of the half, but their comeback was not to be, as Fergal Whitely immediately responded with a beautiful sweep to send the ball into the top corner for Dublin’s second goal, and the home side were all of a sudden 0-12 ahead.

0-12 would soon become 0-14 as Fiotann McGibb and Barrett would add two more. Offaly would start to use keeper Cahill for long range frees as breaking down the Dublin defence was proving virtually impossible. Alan Nolan would also deny Joe Bergin from the spot as he courageously saved a penalty given.

Kevin Dunne and Paddy Murphy would cancel out scores by Keaney and Rushe in an attempt to stay in the game but Dublin would again score 0-03 unanswered before Offaly substitute Shane Dooley would get his first from a free. But there just wasn’t enough time for the men from the Faithful County to reduce the deficit as both sides traded scores until the full time whistle.

Chris Crummey and Cian Boland (2) would close out the scoring for Dublin, with Paddy Murphy, Dooley, and James Gorman finding the target for Offaly. 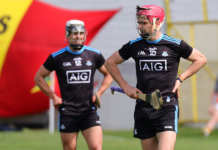 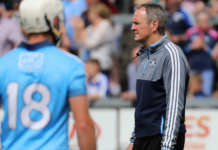