Dublin’s response to their opening Hurling League defeat was resounding this afternoon as they dispensed of Laois. Three goals in the opening 15 minutes of the second half reminded supporters of the boys in blue that there is firepower in abundance.

Both Dublin and Laois came into today’s fixture having lost in Round 1, but it was Mattie Kenny’s men who got out of the traps the quicker. After Oisin O’Rorke got the Dubs up and running with three scores, he then became the provider setting Eamonn Dillon up for the first of four goals. Dillon, unmarked at the back of the box, received O’Rorke’s cross, and buried the ball past Enda Rowland and into the Laois net.

Donal Burke launched a long range shot over the bar and Dublin were 1-04 to 0-00 before Laois had settled in. The home side took their foot off the gas and Laois were happy to step up. Ciaran McEvoy, Aaron Dunphy and Ross King all hit the target to reduce Dublin’s lead to four points. And with the momentum swinging the way of the O’Moore County, Dublin were dealt a blow, losing Eamonn Dillon to injury with 12 minutes on the clock.

Stephen Bergin and James Ryan tagged on two more scores for Laois brought them within two points, but they weren’t finished. And after further scores eventually gave Laois the lead. Willie Dunphy’s first goal came sandwiched between scores from Jack Kelly and Paddy Purcell to give the visitors slender 1-07 to 1-06 advantage. Oisin O’Rorke positively responded twice to push Dublin back in front, but they were dealt another blow, losing Mark Schutte to injury.

Enda Rowland sent over a trademark long range score to level the game but Dublin finished the half with a purple patch to go in 1-11 to 1-08 leaders at the break.

Two goals in the opening five minutes of the second half had Laois reeling and gave Dublin some breathing space. O’Rorke and fist have substitute Dave Keogh rattled Enda Rowland’s net from close to range to give them a seven score buffer.

Laois stayed in contention, but only from the dead ball accuracy of Ross King. But Dublin were firing on all cylinders and were going to be impossible to stop. And midway through the half Ronan Hayes secured the win for his side. The Kilmacud Crokes man plucked the ball from the air, turned and rifled it into the net.

Dunphy got his second goal for Laois before the end of the game as both sides traded scores. But Dublin had done more than enough to get the points before heading to Carlow in two weeks time.

SuperValu, Centra and the GAA launch new initiative ‘Club Together’

With activity further suspended what now for the 2020 GAA season 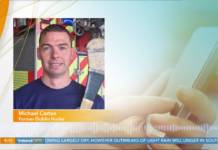 Michael Carton: Don’t be just looking for a cough

Doubts Over Rushe And O’Rorke Ahead Of League Semi Final