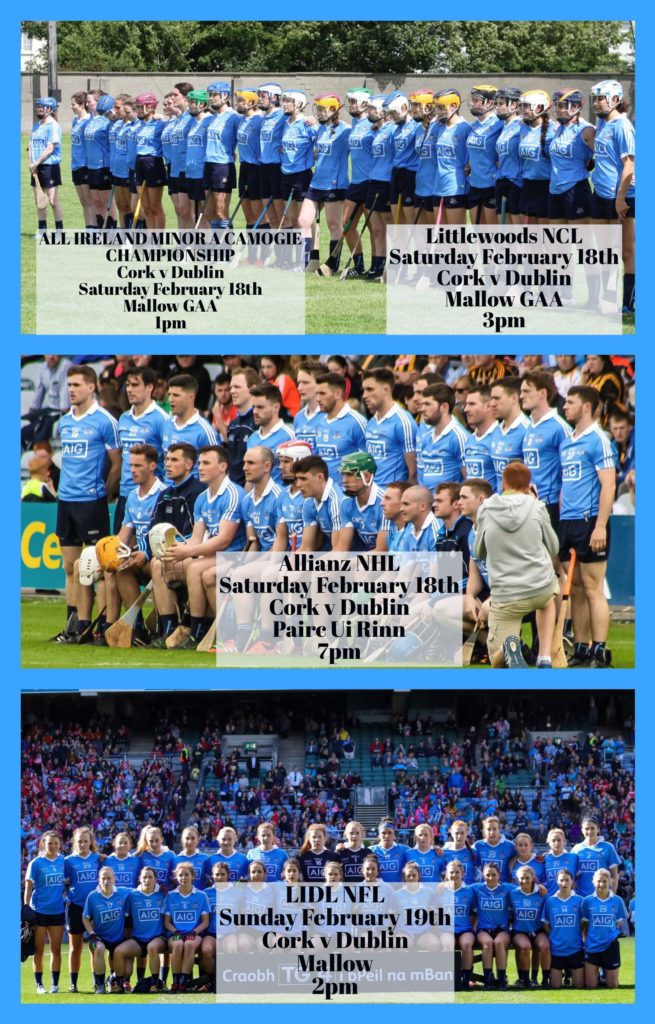 Dublin and Cork will get very acquainted with each other this Saturday and Sunday as four teams from the capital will head south to the rebel county for league and championship encounters.

There are three games to look forward to on Saturday, first up is a double header of Camogie action in Mallow GAA club.

At 1pm Dublin’s Minor A Camogie Squad under new manager Robbie Lewis will get their season underway with their opening All Ireland Championship group game.

That will be followed at 3pm by the meeting of the Dublin and Cork senior Camogie squads in the opening round of the Littlewoods National Camogie League.

Dublin have a new manager in charge in the shape of five time All Ireland winner David Herity and plenty of new faces in the panel for this season. A good result against their host will set them up nicely for what is a very tough group.

Cork will be in confident form after a good win against Clare last weekend and a win for the Rebels on Saturday would all but guarantee them a quarter final place.

Dublin on the other hand head south on the back of a heavy defeat against Tipperary last weekend. The young Dublin side need to take something from the game or they will be staring down the barrel of relegation.

The final Dublin v Cork game at the weekend takes place on Sunday and it’s a mouthwatering repeat of last years All Ireland Ladies Football Final.

Mick Bohan’s Dublin Senior Ladies footballers head to Leeside for their third round Lidl National Football League match with a 100% record in the league so far. They followed up their victory over Monaghan in round one, with hard fought win in a tricky away fixture against Kerry.

Cork opened their campaign with a comprehensive win over the kingdom but suffered a surprise defeat the last day out to Armagh and with home advantage will be looking to get back on track against the Dubs.

There is never more than a kick of the ball between these two great rivals and Sunday should be no different and has all the hallmarks of being an early season classic.