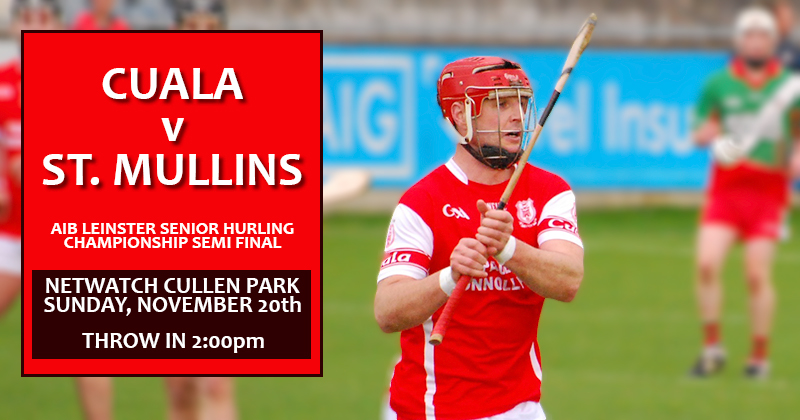 November 29th 2015 is date that the Cuala senior hurling panel will want to rinse from their collective psyche their last visit to the Carlow ground this weekend as they face St. Mullins, a team that has dominated Carlow hurling since Mount Leinster Rangers’ 2013 provincial success.

The Dalkey men arrived to Netwatch Cullen Park last year to face Oulart-The Ballagh in the Leinster Championship Final. Along the way they were dominant and made light work of Coolderry in the Quarter Final and Clara in the Semi Final. But sadly for Cuala the Wexford Champions were to win with two goals separating the sides at the full time whistle.

The similarities between Mount Leinster’s rise and St. Mullins’ rise in Carlow are too much a carbon copy to ignore.

In 2013 Mount Leinster completed their own county hurling three in a row. They then went on to beat Castletown Geoghegan, Ballyboden St. Enda’s and Oulart-The Ballagh to lift the first provincial title in their history. They did reach the St. Patricks Day All Ireland Final only to be outplayed by Galway outfit Portumna.

Since then St. Mullins have won every county championship, but sadly have not gone further than the Quarter Final stages of the provincial competition. They saw off the challenge of rivals Mount Leinster in this year’s county final with nine scores to spare.

They continued this form in the provincial competition beating Westmeath Champions Raharney two weeks ago by six scores. And while they may well be ranked outsiders based on Cuala’s current form, Netwatch Cullen Park will give them a slight edge and the hunger having nothing to lose.

Cuala followed a competitive county final win over Kilmacud Crokes with comprehensive victory over Laois Champions Borris-Kilcotton on November 6th in front of the Parnell Park audience. That day Con O’Callaghan received a last minute call up to the side and the All Ireland Senior Football Champion put in an outstanding performance with a personal tally of 4-03 of Cuala’s 4-16 to 1-14 scoreline.

Manager Mattie Kenny will be buoyed at the recent performances and will hope that this will brush last year’s Leinster Final under the carpet in Cullen Park this Sunday.

Should they be successful they could once again face last year’s Champions Oulart-the Ballagh in the Final, provided they see off the challenge of O’Loughlin Gaels in Innovate Wexford Park this weekend.

But they need not look past St. Mullins.

One things is for sure, the Cuala Roar will travel in numbers to Carlow and will be as vocal as everyone has come to expect.