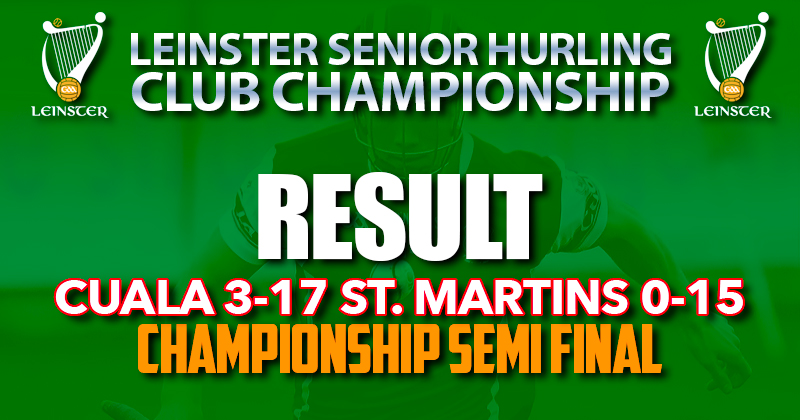 Jake Malone, Con O’Callaghan and Colm Cronin all raised green flags this afternoon, and St. Martin’s gameplay unravelled, losing two players to dismissal in the second half as Cuala slowly turned the screw and frustrated the Wexford men.

Late St. Martins replacement Joe Coleman registered the first 0-02 of the game before David Treacy and Nicky Kenny responded. The Wexford dead ball specialist was their sole threat today and converted another three scores to give the visitors a 0-05 to 0-03 lead after the first quarter.

But Con O’Callaghan’s day was about to begin as he set up Colum Sheanon for a point and less than a minuted later was bearing down on goal himself. But with his shot stopped by Luke White in the Martin’s goal. Fortunately Jake Malone pounced on the rebound for Cuala first of three goals and the momentum had shifted in the Dalkey men’s favour.

It was less than a minute later that Con took his opportunity to send the ball into the net to give Cuala a much deserved 5-point lead with 10 minutes remaining to half time. Both sides registered three more score each; Joe O’Connor, Jack O’Connor and Joe Coleman for Martins, David Treacy (2) and Jake Malone for Cuala, as the champions went into the break leading 2-07 to 0-08.

Half time substitute Darren Codd got the second half underway with a sweet score from play to temporarily close the gap to 0-04, but David Treacy , Nicky Kenny and Colm Cronin continued to build Cuala’s lead and further frustrate the Wexford Champions, who were trailing by 0-08 before Coleman registered his first score of the second half.

Con O’Callaghan again confirmed his frightening attacking skill as he carved out 0-03 in less than 90 seconds of play, before setting Colm Cronin up for Cuala’s third goal, and all of a sudden the Leinster champs were 13-points clear of Martins and cruising.

Cuala rang the changes with O’Callaghan and Cronin taking early leave for a successful haul between them, and St. Martin’s began to fall apart in the space of 2 minutes. Michael Codd hit Sean Moran of the ball and after the referee consulted his umpires, he was shown a straight red for the challenge. Soon after Jack O’Connor, who had already been booked 6 minutes before, received his second yellow and dismissed, leaving Martins with 13 men on the field for the remaining 8 or 9 minutes.

All that was left to do was for Cuala to keep their cool to see the game out. Joe Coleman continued to claw away at the deficit with four more scores, and Daithi Waters added another, but David Treacy and substitutes Brian Fitzgerald and Niall Carty did enough to draw the game to a close, with Cuala winning comfortably.

And with the final score of 3-17 to 0-15 in favour of Cuala, this now sets up a Leinster Final tie against Offaly’s Kilcormac Killoughey on December 3rd.