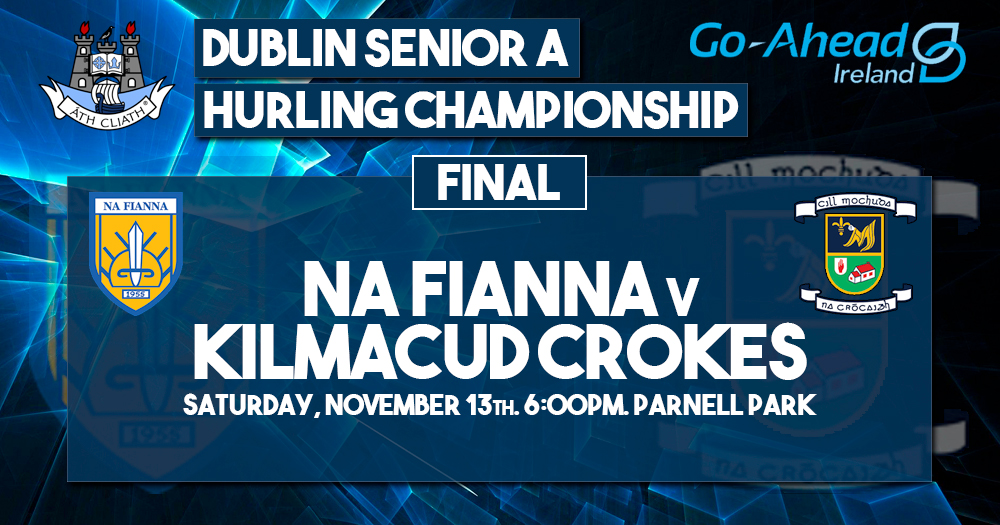 The scene has been set and the gauntlet has been laid down. After 3 rounds of action, quarter and semi finals decided, it’s time for the Dublin Senior A Hurling Championship to go to a new home this season.

Na Fianna and Kilmacud Crokes have seen off all competition to earn the right to be 2021 county hurling finalists. And this Saturday evening at Donnycarney Headquarters, the North and South side panels will square off.

For Na Fianna, it’s an historic occasion as they challenge for the Senior title for the very first time. A huge achievement for the Mobhi Road club. For Crokes it’s a different tale. The Stillorgan men have captured the county title on five occasions between 1974 and 2014. And they also appeared on consecutive finals between 2016 and 2018, including a replay in the latter eventually losing to Ballyboden St. Endas. So there’s a serious purpose for both sides entering this weekend’s decider.

A five point win over Ballyboden St. Endas in this years AHL Division 1 Final was the motivation needed for Na Fianna to throw everything at the Championship to try reach their first county final. And that’s exactly what they did.

In style they saw off Whitehall Colmcille in their 4-27 to 1-13 opener On September 3rd, only a couple of weeks after the league final. There followed a 2-24 to 1-15 victory over Group runners up Craobh Chiarain, before finishing the Round Robin phase with a 1-18 to  0-12 win over Ballinteer St. Johns to top the Group 1 table.

A slightly sterner challenge was met head on as St. Judes pushed Na Fianna to their limits in the last eight. But even extra time couldn’t stop the Mobhi Road men with Colin Currie inspiring his side to a three point victory from three points down.

And in their Semi Final clash with a hotly tipped Lucan Sarafield, Na Fianna took their lead early and lead from the front. And it was Currie again who made the difference, with a goal before half time putting Na Fianna firmly in the driving seat, confidently advancing to this Saturday’s decider.

Can Crokes Finally Get Over The Line Again

It hasn’t been for the want of trying over the kast decade, but there’s a renewed vigor in Kilmacud Crokes this season. Finishing below Ballyboden and Cuala in the AHL, the Stillorgan side set their sights on the county championship.

There’s no more a confidence builder than opening your Round Robin campaign by beating reigning champions Cuala to get you up and running. And that massive 3-24 to 0-18 was the perfect foundation.

Two further wins, a 1-28 to 2-09 victory St. Brigids and a 1-26 to 0-14 win over Thomas Davis saw Crokes easily top Group 3, and advance to a Quarter Final clash with St. Oliver Plunkett Eoghan Ruadh.

A man of the match performance from Alex Considine, along with fellow inside forward Ronan Hayes inspired Crokes to a 1-26 to 0-19 victory over Plunketts, opening the door to a Semi Final, and another date with rivals Cuala.

There was no revenge for the Dalkey men though as Crokes were the better side for the entrance fee to Parnell Park. And a Ronan Hayes converted penalty, along with 6 points to his tally saw Crokes to a 1-18 to 1-13 win, sending Cuala out of the Championship, smashing their dream of a third consecutive county crown.

All that remains now is a Saturday evening 6pm throw in under the lights at Dublin’s Parnell Park Headquarters. There will be new hurling champions. Can Na Fianna win their first ever Dublin Senior A crown? Or will Kilmacud Crokes return to glory for the first time since 2014?

We don’t have long to wait.

Dublin v Tipperary, And Their Hurling League Record This Decade

HEROIC SECOND HALF NOT ENOUGH FOR DUBLIN AS THEY BOW OUT...