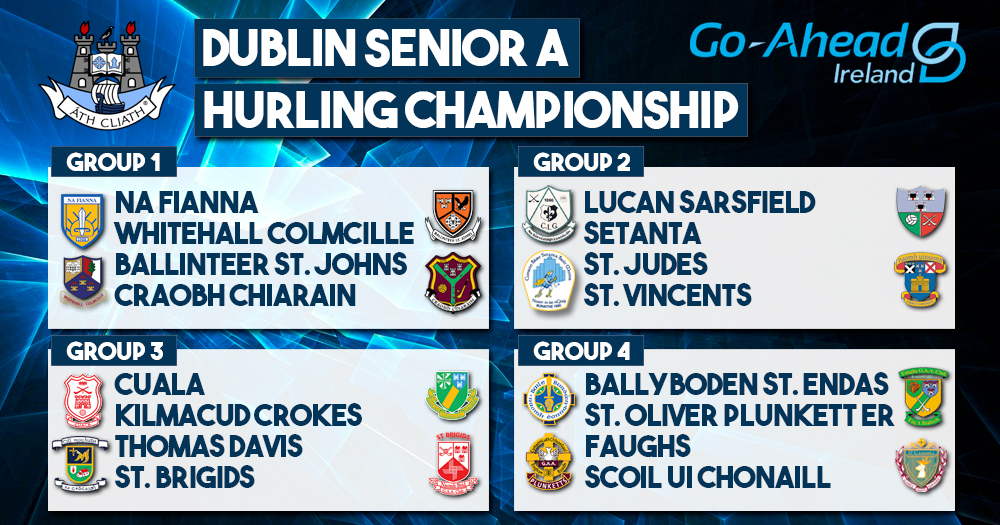 Last night we went through the draw for the Senior 1 Football Championship to look forward to what’s in store later this year. And tonight we put the Go-Ahead Dublin Senior A Hurling Championship.

Like the Football competition, the Hurling Championship is divided into four groups of four teams for the Round Robin section. And the reigning champions Cuala find themselves in tough draw.

Semi Finalists last year Na Fianna were unbeaten in the Group 4 competition. The Mobhi Road men even recorded a win over Champions Cuala. They’ll be raring to go and will be quite content with the competition in Group 1 this year. They overcame Faughs in the Quarter Finals before losing to Ballyboden St. Endas in the last four.

Whitehall Colmcille and Ballinteer St Johns finsihed bottom of groups 1 and 3 respectively. Whitehall did register a win over Faughs in the round robin section and will relish play local rivals Na Fianna. Ballinteer on managed one drawn game against Plunketts.

Paired at the group stages again this year are Lucan Sarsfield and St. Vincents. And all that seperated them in Group 1 last year was an 11 point score difference in favour of Lucan at the top of the table. They played out a 1-17 a piece tied game in the final round to both advance.

Lucan beat Kilmacud Crokes in the Quarter Final only to lose to Cuala in the Semi Finals. St. Vincents were paired with Ballyboden in their last eight clash but sadly suffered a 10 point defeat.

A final round draw against Thomas Davis was all Setanta secured in last year’s championship competition so there’s plenty of room for improvement.

St. Judes finished third in Group 3 last year. They recorded a opening round draw against Faughs and a third round win over Whitehall. But it wasn’t enough to advance.

Reigning champions Cuala will be looking to retain their coveted county title in a hotly contested group. But they’ve been through the mill before and come out the right side. A final rounds loss to Na Fianna didn’t stop them advancing past St. Brigids and Na Lucan before pipping Ballyboden in the championship decider.

The champions will meet Thomas Davis once again in the group stage, with Thomas Davis finishing third in teh group last year. They only managed a Round 3 draw with Setanta last season so wil want to build.

Kilmacud Crokes had a clean sweep on the Group 2 competition a year ago, including a win over eventual finalists Ballyboden. It was heartbreaking to only narrowly lose their quarter final clash with Lucan Sarsfield by the minimum. But there’s more to come from the Stillorgan side.

Despite losing to Faughs in the final round of Group 3 last year, St. Brigids topped the table. They unfortunately met Cuala in their Quarter Final and were beaten on a 2-14 to 1-26 scoreline.

Five points seperated Cuala and Ballyboden St. Endas in last years final, so Boden will have been disappointed to not finish out the year with the silverware. After an opening round defeat to Crokes they bounced back and went on a great championship run.

They’re paired in the group stages again with last year’s debutants Scoil Ui Chonaill. Scoil didn’t register a win last year so get a second bite in Senior A.

Faughs were runners up in Group 3 last year advancing to the Quarter Finals. But their run ended there as they suffered a 4-20 to 2-10 loss to Na Fianna in a tough Quarter Final.

**The Dublin Senior A HUrling Championship is scheduled to get underway in mid September. Fixtures will be confirmed at al later date. The competition will run right through the the final at the end of November.