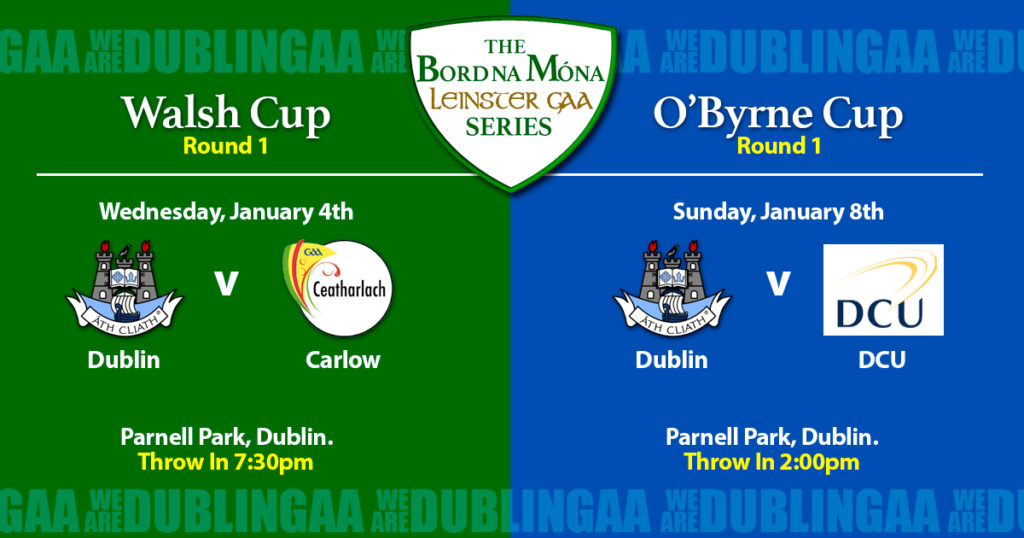 Tomorrow night the Leinster GAA Pre-season competitions commence and the 2017 season will be underway.

This week, the first of three rounds will take place in both the Walsh Cup and O’Byrne, starting tomorrow night with Ger Cunningham’s Dublin Senior hurlers taking on Carlow in this year’s Walsh Cup competition.

Last year Dublin successfully guided their path through the round phases, beating UCD, Antrim and Laois quite comfortably to set up a mouth watering Semi Final encounter against a favoured Galway panel. But Cunningham’s charges put in a massive performance against the Tribesmen to win by nine points on the day and qualify for the competition’s final against Wexford. This was Dublin fourth final in a row and they’d been runners up the previous two years.

Croke Park was the venue on a very cold January evening. And Ger’s panel dominated a game many thought would be a very tough encounter for the boys in blue, beating Wexford to claim their 7th Walsh Cup.

Their opponents, Carlow on the other hand are still aiming to reach only their second Walsh Cup Final in history. They were runners up to Laois in their only previous final appearance in 1980. Last year they finished bottom of their group, behind Wexford, Meath, and their own College I.T side. They’ll be arriving in Dublin hoping to improve on that form.

Then Sunday sees the beginning of Dublin’s O’Byrne Cup campaign. And as announced yesterday, the Dublin footballers will be managed and coached by Dublin legend Paul Clarke for the competition. What is leading the intrigue for many, is what players will be at Clarke’s disposal, with many tied to College teams and a good selection of the All Ireland winning side on the team holiday in Jamaica. But if Sunday’s Dub Star performance is anything to go by, there will be plenty of players for Paul to choose from.

Dublin left the O’Byrne Cup behind in 2016, after losing to Longford in the Semi Final. Up to that point they had tied their opening game against Wexford, but went onto beat IT Carlow and DCU in the remaining round games, topping the group by a solitary point. Interestingly, Dublin have only been in two O’Byrne Cup finals since the turn of the decade and will obviously be looking to start 2017 off strong and lift this trophy to add to the eight they’ve won in previous years.

DCU are always a competitive opponent when it comes to this competition and have won the title twice in recent years, beating Louth in 2010 and Kildare in 2012. The college team made history in 2010 as the first college team to win this Leinster Competition. They were a very close runner up to Dublin in the round phase last year and have an abundance of talent to choose from. Anyone who has watched DCU and Dublin square off in this competition will know that the competition is fierce and not for the faint hearted.

Throw in for Dublin’s opening O’Byrne Cup game, versus DCU on Sunday, January 8th, is 2:00pm in Parnell Park.

Dublin Pass Omagh Test And Are First Side Through To All...