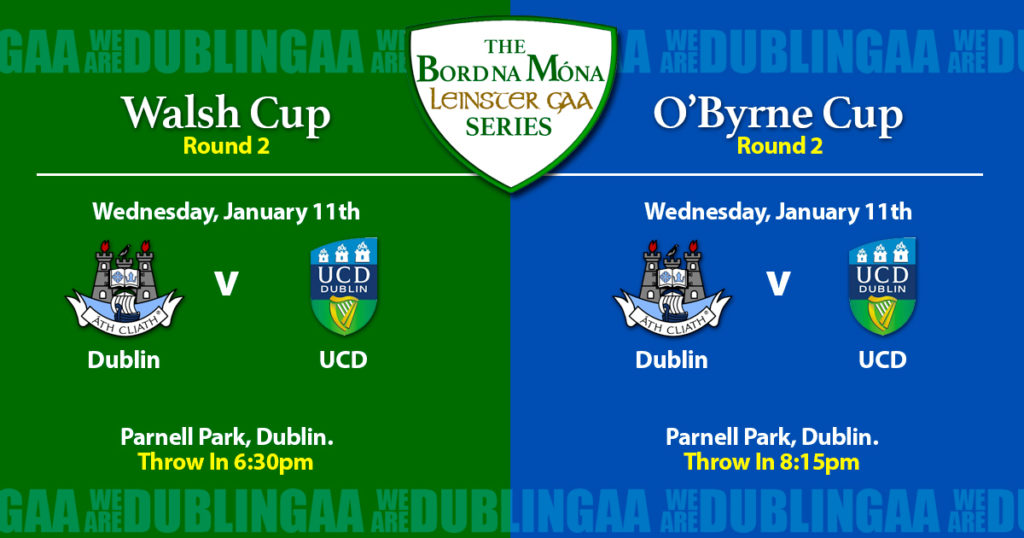 After both the Dublin senior footballers and hurlers saw themselves through Round 1 of their respective Bord Na Mona Leinster pre-season competitions, both will now quickly turn their attention to Round 2.

And for all Dublin fans interested, what better way to keep the momentum going than a double header in their Donnycarney Headquarters.

Parnell Park will turn the floodlights on this Wednesday, January 11th as the Dublin Hurlers and Footballers will take on UCD’s best in Round 2 of the Walsh and O’Byrne Cups.

Ger Cunningham’s hurlers successfully cleared the first hurdle last Wednesday evening, beating Carlow 2-17 to 1-13 and will be very content and upbeat following that. They go into this Wednesday’s game expected to make it two for two. UCD’s opening fixture is one they’ll want to forget. The Belfield men were educated by a very strong Wexford panel who ran out easy winners on a massive score of 5-31 to 1-08. By half time on Sunday UCD were trailing 4-13 to 1-05 and only taking three more scores in the second half will be worrying for the college unit.

Throw in between Dublin and UCD in the Walsh Cup on Wednesday is 6:30pm

Dublin’s Senior football panel, under the watchful eye of Paul Clarke, were very impressive last Sunday, beating DCU 1-15 to 0-11 in Parnell Park and momentum will be key for the Dubs as they face UCD’s footballers. The college men were held to a draw by Wexford on Sunday on a score of 2-14 to 1-17. But Dublin fans will be out on Wednesday to see if Jack McCaffrey lines out, after making a 35 minute cameo in Wexford at the weekend.

Throw in between Dublin and UCD in the O’Byrne Cup on Wednesday is 8:15pm

Based on the attendance yesterday for Dublin’s O’Byrne Cup game, you can expect another big crowd in Parnell Park on Wednesday. Don’t miss out.