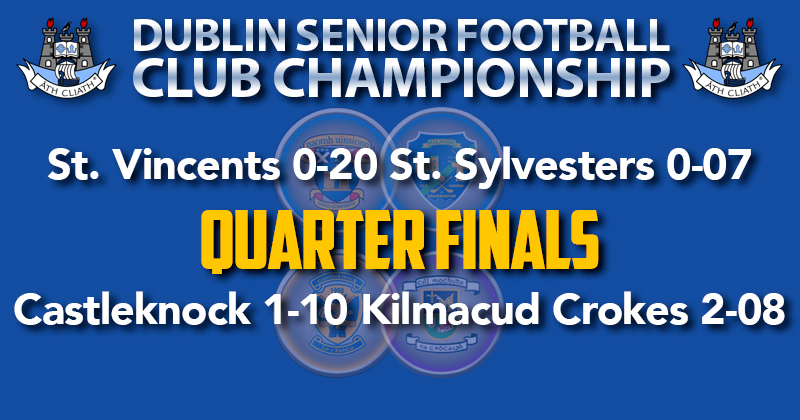 A good swell of people turned out in the cold tonight in Parnell Park to watch the first two of this year’s Football Championship Quarter Finals. And the great contrast between both games made for a good night’s entertainment, despite the ground running out of cups for the beverages to keep everyone warm.

St. Vincents and Kilmacud Crokes both successfully traversed their fixtures to secure their spots in the last four of the competition, with the remaining two spaces to be filled tomorrow and the draw to be made on Monday.

Sylvesters certainly got stuck in for the opening exchanges, and only trailed by two scores by the start of the second quarter, but sadly they had to wait until the thirteenth minute of the second half before Gary Sweeney scored only their fifth point, and by that stage they were ten points adrift of Vincents who were cruising towards the win.

Mossy Quinn was again perfect with his delivery as he accounted 0-08 tonight (3f), with Enda Varley trailing him on 0-04 with another impressive performance.

Despite Diarmuid Connolly only scoring a point either side of half time, his influence was abundantly apparent. His passing and ball control were as polished as ever, as he fed assists to Varley, Quinn and Shane Carthy during the game.

While there were no goals in tonight’s encounter, both Quinn and Connolly had the best opportunities. A shot from close range should have seen Mossy net the ball in the first half, but it drifted up and over the bar. Connolly received the applause of the crowd just before half time for a superb catch surrounded by defenders, but sadly saw his attempt curl away and wide.

The game was all but won by half time, and the introduction of the likes of Gavin Burke, Joe Feeney and Eamonn Fennell only bolstered the Vincents side.

Alan Foy’s introduction in the second half for Sylvesters saw a bit of an injection into their attack, but neither him nor Sweeney were able to break down the Vincent’s defence.

So it was a quick break and onto the second of tonight’s games, with last year’s beaten finalists Castleknock facing Kilmacud Crokes.

Following their amazing season last year, expectations were high for Castleknock, but this was always going to be tight affair. And in contrast to tonight’s opener there was edgy feel to this one right from the off.

There was no sign’s of any All Ireland hang over from Dublin’s three stars as Cian O’Sullivan, Paul Mannion and Ciaran Kilkenny all played a massive part in both sides performance.

The opening of the game was simply superb. Mark Vaughan got Crokes up and running with a wonderful score from distance and within minutes Pat Burke had the ball in the bottom corner of the net to give Kilmacud an really lead.

Dessie Carlos, who had an amazing 2016, returned a brace for Castleknock before Paul Mannion completed a gauntlet run, firing the ball into the top of the net for Crokes second green flag.

Castleknock did start to get to grips with the tie. Seamus O’Carroll, who was dangerous for the entire game opened his account, and Kevin Kindlon also added another before James Sherry inserted himself into the action.

With around 5 minutes to go before the break, Graham Hannigan despatched a ball towards the goal and Sherry graciously palmed it into the net to leave the minimum between the sides at half time.

Castleknock started more spritely in the second session, with Seamus O’Carroll and Shane Boland scoring points either side of an impressive Callum Pearson finish.

8 minutes in Mark Vaughan was replaced by Kevin Dyas, which meant Paul Mannion would take the dead ball role on with the score at 1-06 to 2-03.

Mannion accepted the challenge and pointed three unanswered frees before Colin Lynch took one of his own to bring Castleknock back within 0-02.

Seamus O’Carroll dug deep and scored two from play to bring the sides level again with 5 on the clock but Pat Burke responded with a point to edge Crokes ahead by a nose. An amazing chance by Ross McGowan rattled off the post, but the referee had called the game back for a free with paul Mannion again delivered.

Kilmacud were 0-02 ahead and in additional time and Castleknock were throwing everything at them. A late rewarded free gave Ciaran Kilkenny an opportunity which he rocketed toward a packed Crokes goal, but he had to settle for the point, leaving the minimum between them at the final whistle.

Kilmacud prevailed by the narrowest of margins. Castleknock 1-10 Kilmacud Crokes 2-08