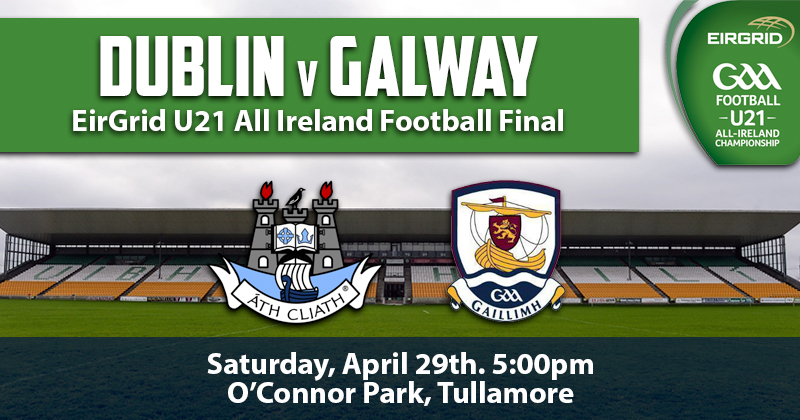 O’Connor Park in Tullamore will be the host for this year’s EirGrid All-Ireland U21 Football Championship Final between Dublin and Galway.

This afternoon The GAA have announced that the game will take place at the Offaly venue on Saturday the 29th April with a throw-in time of 5:00pm.

Dublin comfortably beat Donegal in Breffni Park on Saturday to book their place in the decider for the second time in four years, while Galway shocked hotly tipped Kerry in Ennis to reach the final for the first time since 2013.

Dublin have recent U21 football experience in O’Connor Park having lost to Mayo in last year’s All-Ireland semi-final there, while Dessie Farrell led a star-studded Dublin side to All-Ireland U21 glory at the venue in 2014.

Galway’s most recent U21 outing at O’Connor Park was in 2013 when they beat Kildare in the semi-final stage.

It’s the first All-Ireland U21 final meeting between the counties since 2002 when Galway triumphed by 0-15 to 0-7.