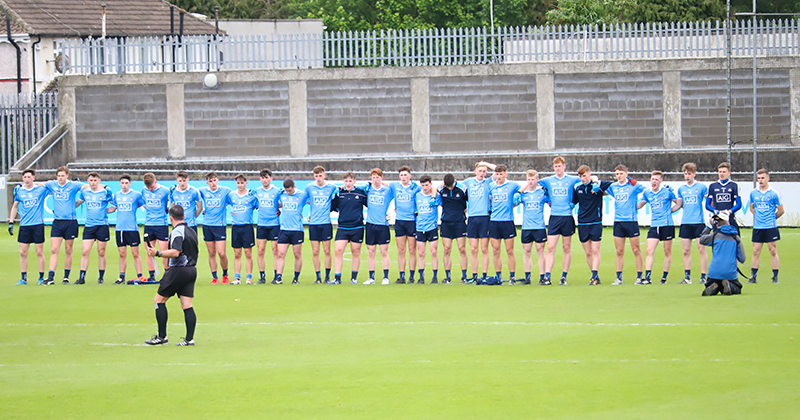 Tonight, Dublin’s U17 footballers squeezed past Laois in O’Moore Park to set up a Final encounter this weekend against Meath in the Leinster Championship.

St. Maur’s Ciaran Archer proved a menace to the Laois defence scoring a total of 1-09 in tonight’s contest.

Both sides were evenly matched at the beginning of this game, scoring 0-03 a piece in the opening 10 minutes, but Dublin took off scoring 0-06 without reply.

Laois were awarded a penalty which Niall Dunne converted to a goal around the 22nd minute, but Ciaran Archer, under pressure, sent the ball screaming into the roof of the Laois net 3 minutes later to bolster his sides lead.

At the break Dublin took their respite 0-06 clear of their opponents but Laois would keep Dublin on their toes right through the second session and it was four minutes additional time before referee David Hickey called time on the proceedings.

Archer, Adam Byrne and John Foley led the charge tonight for the Dubs, with Darragh Warnock, Jordan Leonard and Fionnan O’Sullivan all adding vital score the get this side over the line and into this weekend’s final.

As mentioned, Dublin now face Meath, who defeated Kildare 2-13 to 1-12, this Saturday in the inaugural provincial final at this grade.

The counties met already in the opening round with Meath prevailing 1-10 to 1-5 after outclassing Dublin in the opening quarter to build a 0-8 to 0-0 advantage.

But a lot has changed since then, and this Dublin side are peaking just at the right moment.

STEPHEN CLUXTON WILL JOIN THE CENTURY LEAGUE CLUB THIS WEEKEND AGAINST...