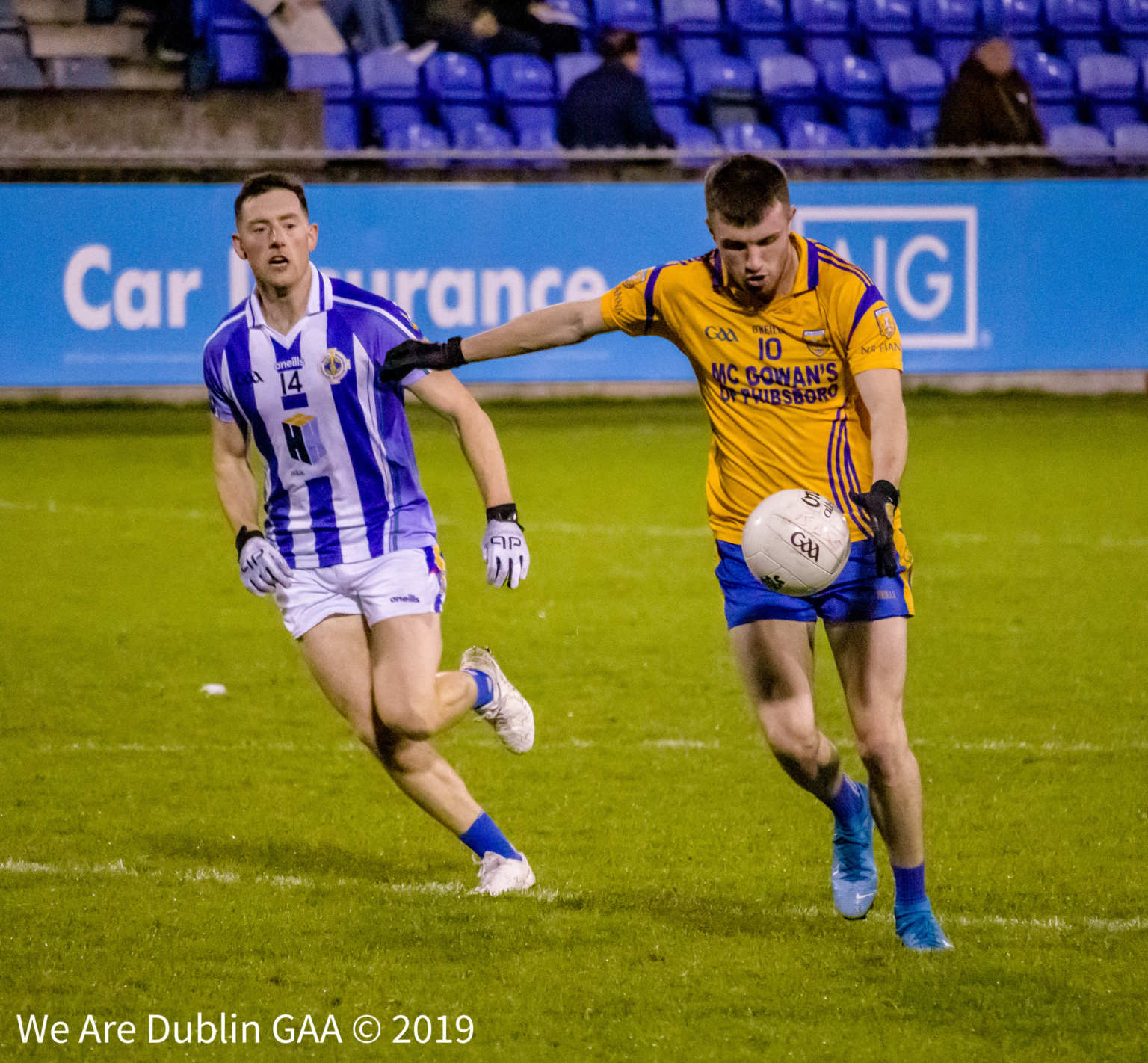 A late brace of goals from Colm Basquel in the second period of extra time sent Ballyboden St Endas through to the semi finals finals of the Dublin Senior 1 football championship.

It was a heartbreaking defeat for Na Fianna who had led by four with just five minutes of normal time remaining, but a goal from Colm Basquel and a converted 45’ from goalkeeper Darragh Gogan deep into injury time brought the game to extra-time.

Na Fianna sharpshooter Conor McHugh who had already scored 0-06 in an excellent display was very harshly shown a second yellow card just before at the end of normal time.

TV replays showed Ballyboden St Endas Declan O’Mahoney hauling McHugh to the ground and then refusing to release his grip on the Na Fianna number 14 and as usual is such incidents the referee issued both players with a yellow and Na Fianna missed McHugh’s influence and scoring threat in extra-time.

There was just a single point scored in the first period of extra-time by Na Fianna’s Aaron Byrne, but the Mobhi Road outfit were left to rue a guilt edged goal opportunity.

Glenn O’Reilly was put through one on one with the Boden keeper by the Aaron Byrne but he opted not to take a shot at goal and passed to James Doran which allowed Robbie McDaid to get across and block his shot.

Na Fianna started this epic encounter brightly and raced into an 0-03 to 0-01 with points from Niall McGovern, James Doran and an Aaron Byrne free. But points from Ryan Basquel and Ross McGarry brought the sides level.

A Conor McHugh converted free and a fine point from James Doran restores Na Fianna’s two point advantage. The impressive Ross McGarry replied with a well taken point for Ballyboden St Endas to leave the bare minimum between the teams.

A brace from McHugh stretched the lead out to three for the Mobhi Road men. Ryan Basquel scored two more efforts to leave just one in it, but McHugh made certain Na Fianna would take a two point advantage into the break with another excellent point to leave the score at half-time 0-08 to 0-06.

Here are the highlights from this evening’s epic #DSFC1 quarter final, as @Bodengaa edged out @clgNaFianna after Extra Timepic.twitter.com/CmnISokQCM

It was all square just three minutes into the second half thanks to a Colm Basquel converted free and a point from Declan O’Mahoney. And four minutes later Ballyboden St Endas took the lead for the first time in the game with another fine point from Ross McGarry.

Aaron Byrne levelled the game again in the 39th minute from a 45’. Ballyboden regained the lead with a point from Colm Basquel but it was short lived as points from Byrne and McHugh gave Dessie Farrell’s side the lead again.

Back came Ballyboden with points from veteran Conal Keaney and a Ryan Basquel free. Na Fianna though looked to have wrestled control of the game when points from James Doran and Conor McHugh were followed with a goal from Killian Deeley.

But with just four minutes left on the clock Basquel hauled Ballyboden back to within a point of Na Fianna with a well taken goal and deep in stoppage time ‘Bodens’ goalkeeper Darragh Gogan sent them game into extra time with a well struck 45’ that split the posts to leave the score at the full-time whistle 1-14 apiece.

Na Fianna controlled the opening ten minutes of the first period in extra-time but only managed to add a single point to their total scored by Aaron Byrne to lead 1-15 to 1-14 as the sides swapped ends.

When Colm Basquel equalised just after the restart of the second half of extra-time it was unclear exactly who might win this pulsating quarter final.

Basquel settles the argument with two brilliantly taken goals after some great work from Michael Darragh Macauley in the build up to both goals.

That insured Ballyboden St Endas are in the hat for the semi final draw and a possible County Final appearance for Anthony Rainbows side for the first time in three years.

"It's just an incredible game of football. Alot of credit has to go to both sets of players"@BodenGAA manager Anthony Rainbow spoke to #DubsTV, after his side's #DSFC1 Quarter Final win over @clgNaFianna this evening.