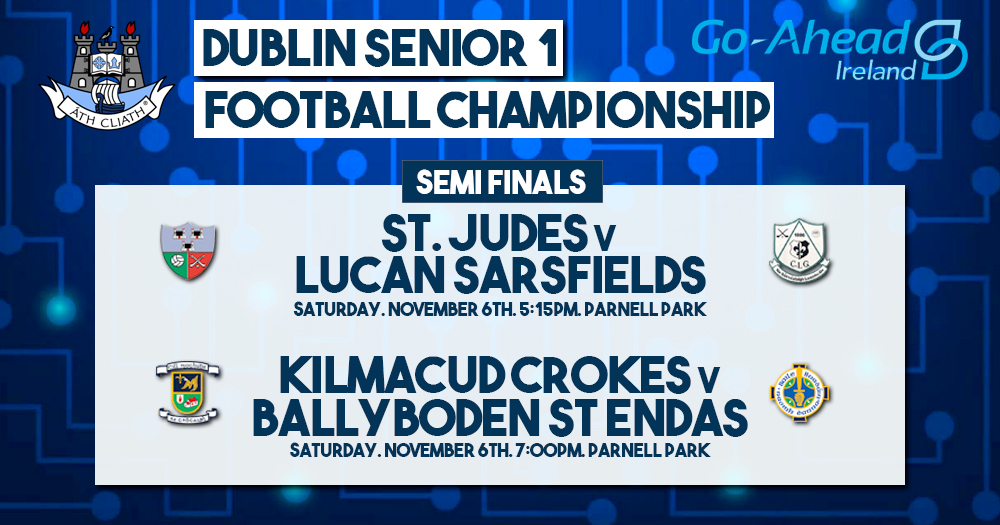 Just like last weekend in the Senior Hurling Championship, tomorrow evening at Parnell Park the focus will be on the big four in the Dublin Senior 1 Football Championship. St. Judes, Lucan Sarsfields, Kilmacud Crokes and Ballyboden St. Endas are the last teams standing. Reigning Champions Ballymun Kickhams fell at the last hurdle, along with Thomas Davis, Castleknock and Na Fianna. Let’s take a look at the two Semi Finals a little closer.

The first of tomorrow’s last four clashes will see the men from Tymon North take on the men from the 12th Lock. Judes and Lucan both came out of Group 4 in the Round phase of this year’s competition. They squared off at the beggining of the competition. And back in September it was all square on a 1-14 to 1-14 scoreline.

Judes went into the Quarter Finals to face Thomas Davis. And a 6 point lead at the first half water break was the foundation that Judes carved their path to the semi final beating Thomas Davis. A Niall Coakley converted penalty was the first of three goals for the Tymon North men. But Thomas Davis fought back to 0-02 by half time with the score at 1-08 to 0-09.

Fionn Murray leveled the game 3 minutes into the second half. And by the second half water break there was a bounce of a ball between the sides with Judes having the advantage on 1-12 to 0-14.

Tom Lahiff and Shay Ryan struck the net late in the half to give Judes a comfortable 7 point lead with the clock running down for Thomas Davis. And a Brian Coakley converted free capped a strong last quarter, seeing Judes into the Semi Finals.

Kickhams held a 0-04 to 0-02 lead at the first half water break and hung onto that lead, extending it to 0-06 to 0-02 on the 20 minute mark. But three converted frees from Brendan Gallagher brought Lucan back to within a point before Smith hit the net after a great turnover.

With Lucan a point the better at the restart, James McCarthy drew Ballymun level. But by the second half water break Lucan had notched up a 6 point lead on 1-14 to 0-11. But the break broke Lucan’s momentum and Ballymun pulled themselves back with scores from Dean Rock and John and Paddy Small. On 62 minutes Rock converted a free to tie the game. But Gallagher once again put Lucan in front with the clock running out, sending them through to the last four.

A 2-17 to 1-11 victory over Castleknock saw Ballyboden St. Endas through to tomorrow’s second Semi Final. That win was preceded by Boden finishing top of Group 1 after 3 Rounds.

Castleknock held a one point lead at the first half water break. And despite Darragh Warnock goal for the Somerton men, Boden faired the better taking 4 point lead into the second half on 0-12 to 1-05.

Aaron Waters struck the first of Boden’s 2 second half goals 3 minutes after the restart. And Ciaran O’Reilly sank their second with 7 minutes remaining on the game clock.

The second half appeared to be one way traffic with Boden dominating. Castleknock only registered 6 points in the half with Ballyboden adding 2-05 to their first half tally to comfortably advance to the next round of games.

Kilmacud Crokes went three for three in Group 2. And in an incredible finish in their Quarter Final, Crokes hung on to see themselves through to the Semi Final. Na Fianna really drove at Crokes. Particularly in the second half but the Stillorgan side dug deep to hold their 2 point lead and secure the win.

Crokes were 5 clear at the first half water break thanks in part to a cracking Dara Mullins goal on 7 minutes. But credit must go to the Mobhi Road men for sheer determination.

Na Fianna slowly chipped away reducing the defecit to 4 points at half time on 1-06 to 0-05.

Again on the restart Na Fianna kept pressure on Crokes reducing the gap to just 2 scores. By the water break the score was 1-08 to 0-09. And in a pulsatingly tight finish, it was Crokes who came out on top. Only 3 points seperated them on a 1-11 to 0-12 scoreline.

An Aaron Byrne goal attempt deep into additional time was cleared off the line. Had it gone in it would have handed Na Fianna the win, but it just wasn’t to be.